Cooking, My Grandma's Recipes, Sweets
Pin14
Share
Tweet
The links in this post may be affiliate links. This means I may receive a small commission if you buy through these links, at no additional cost to you, which helps me run this blog. Read my disclosure here. 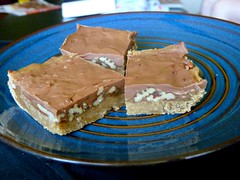 Well, friends. I have to tell you something.

Phew, glad I got that off my chest.

Sometimes, I make recipes (usually new ones, but sometimes ones I’ve used before) and I just don’t get it right. This is one of those times.

My grandma makes these turtle bars, and they might be my favorite thing she makes. Definitely top 5. So after we got all my grandma’s recipes last year, I couldn’t wait to make them. Here’s the thing, though. My grandma makes a lot of these recipes all the time so she knows exactly what to do. Which means that sometimes her recipes are slightly lacking in specificity. 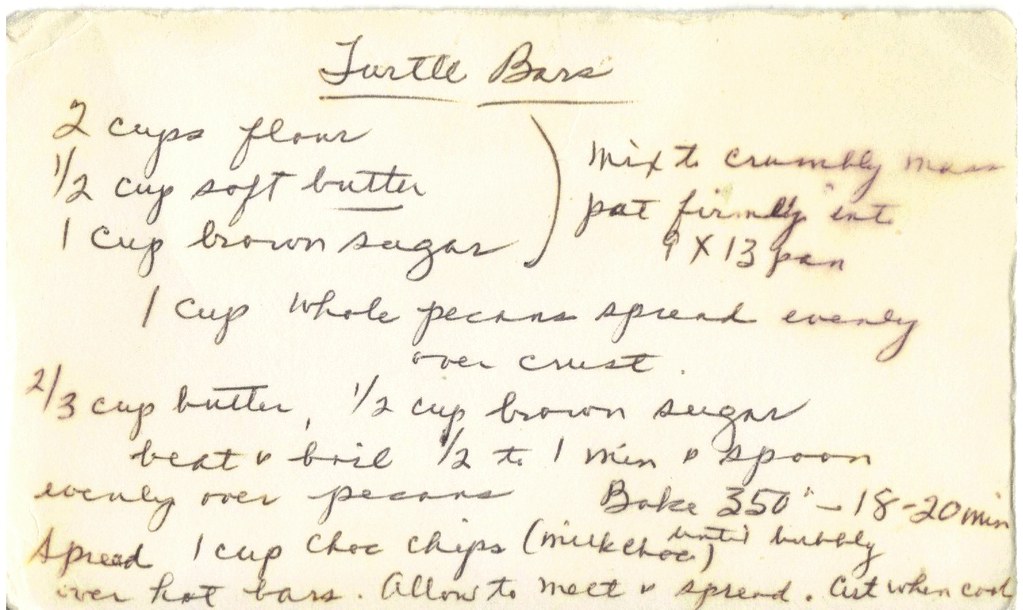 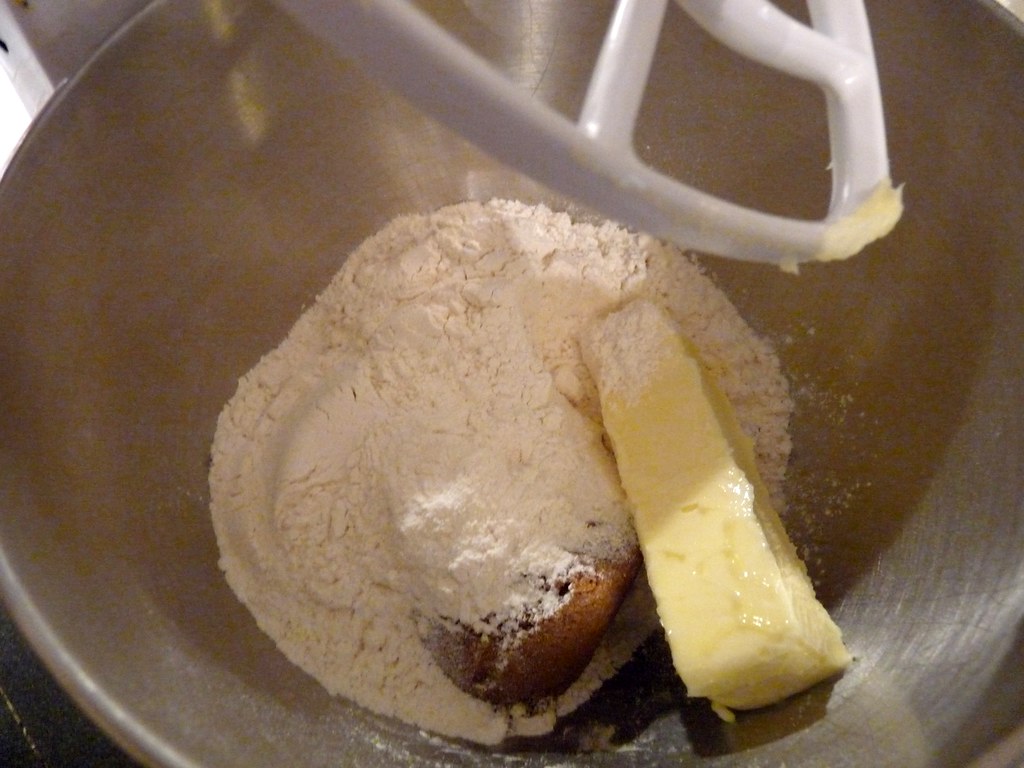 I dumped the butter, brown sugar, & flour in my mixing bowl and mixed it up. 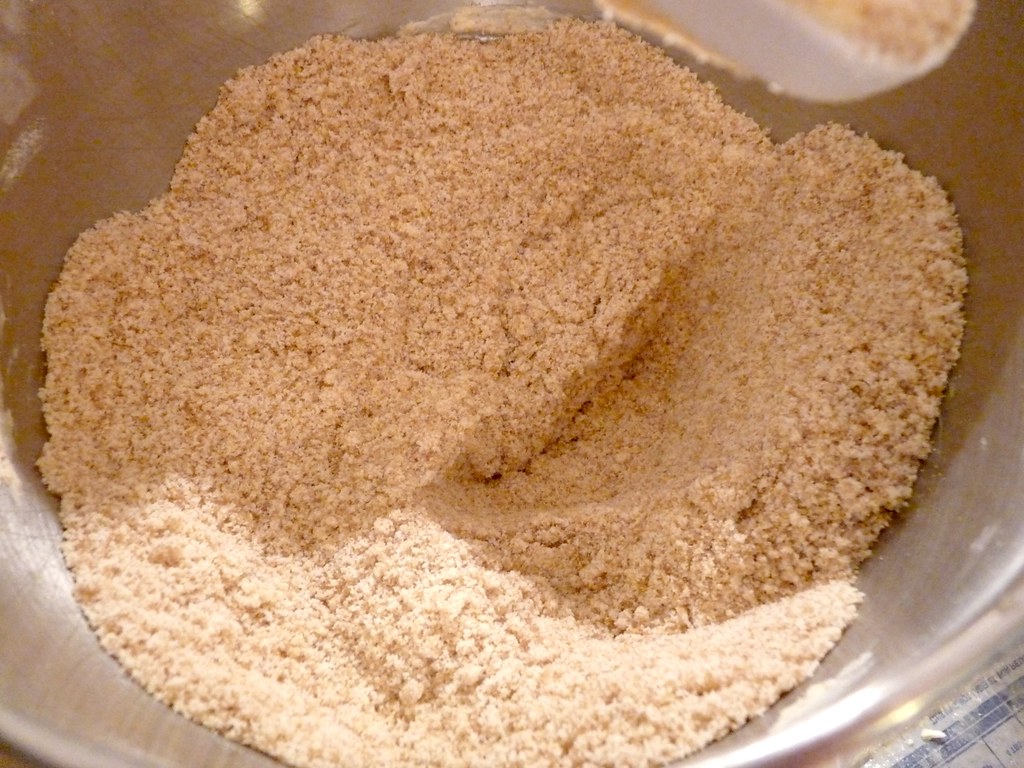 It was a crumbly mass, alright. Really crumbly. I was a little bit concerned because the sugar was still really grainy & separate from the flour. I just went with it, and hoped it would change in the oven. 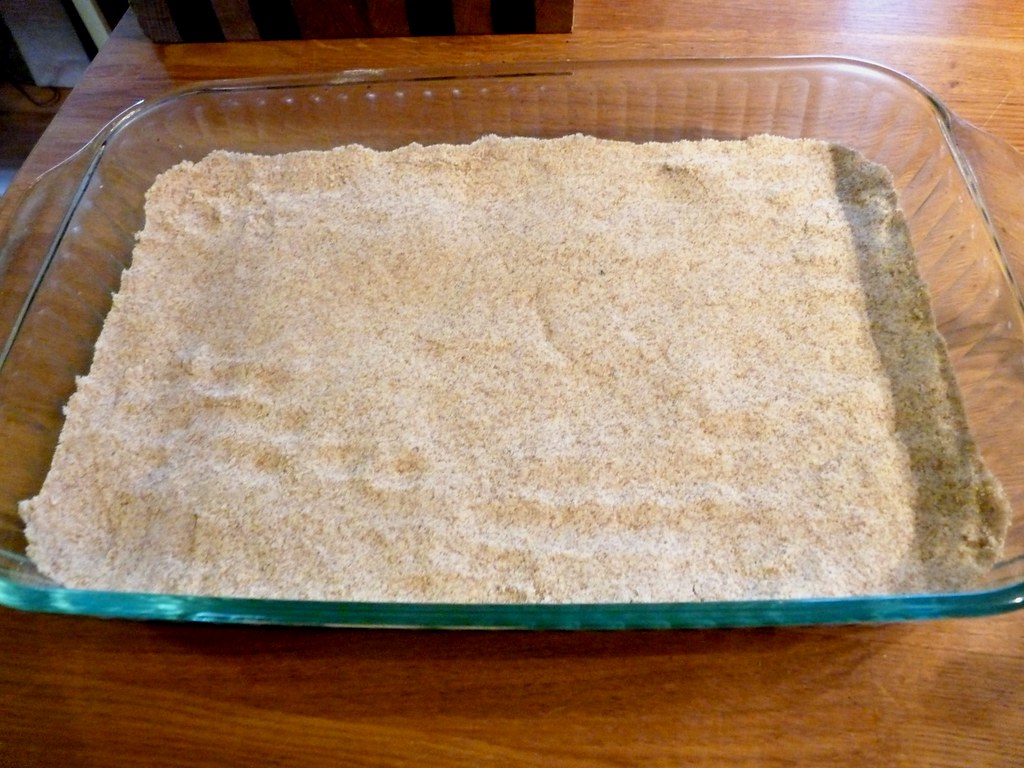 I pressed it into a 9×13 pan. See how grainy it looks? It held together, but just barely. 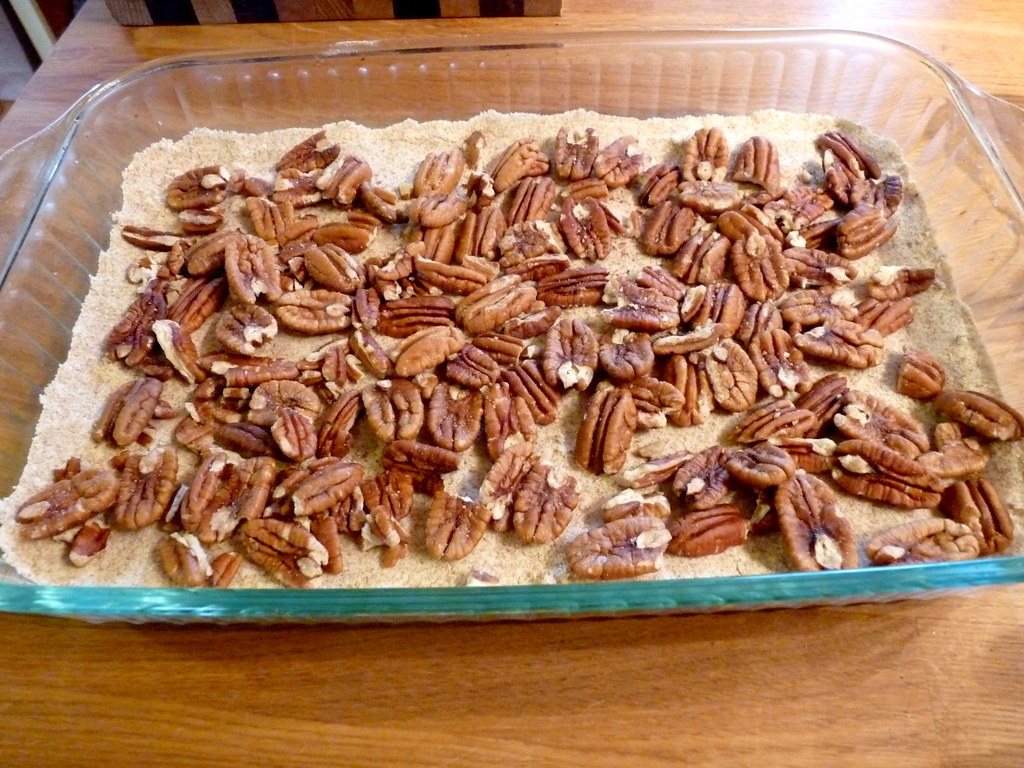 Next were the pecans. I used more than the recipe because, well, I like pecans. And if some is good, more is better. 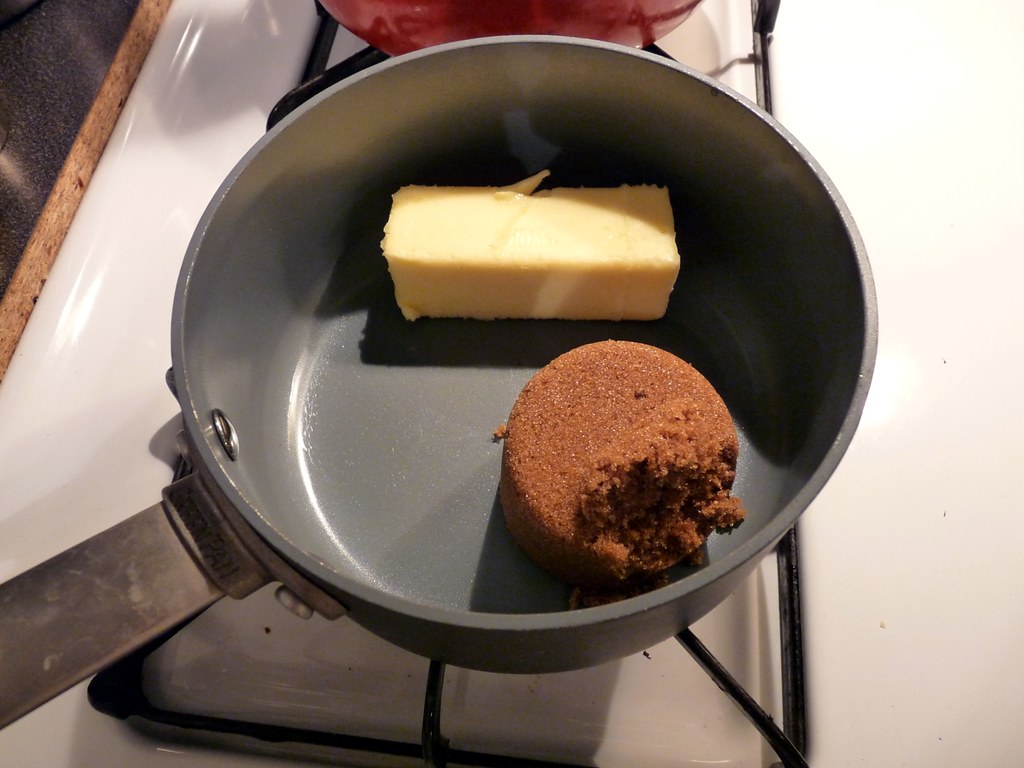 Then for the caramel layer. (Note: it’s not really caramel, because for that you’d have to make candy, and that’s a pain. But this has a very similar flavor and it’s delicious.) I put the butter and sugar in the saucepan. The recipe says to beat & boil for 1 minute. 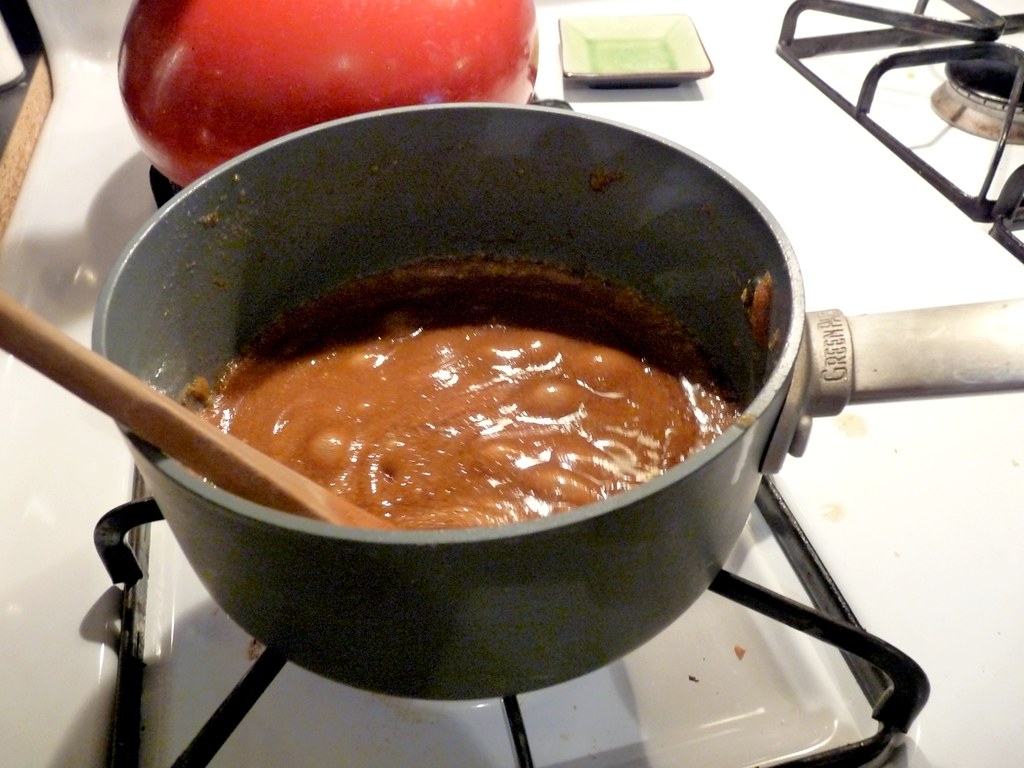 I waited until the mixture was really boiling before I started timing it. 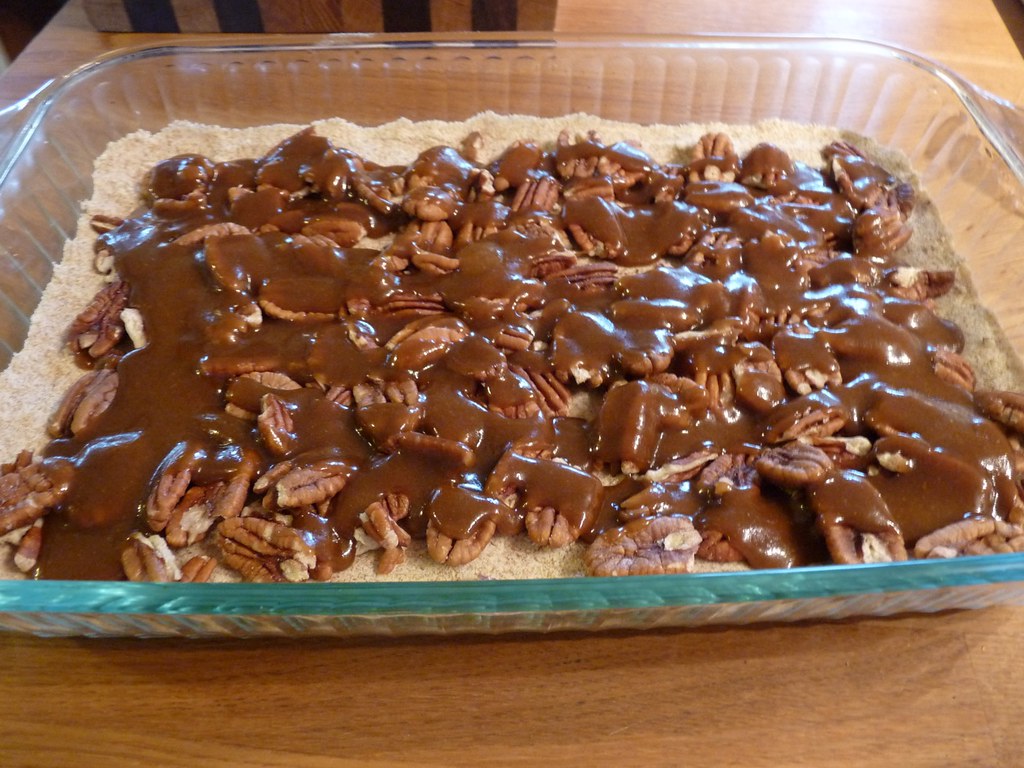 But then when I poured it over the pecan layer, something was off. It seemed like it didn’t spread enough. I thought maybe I boiled it too long. But I carried on. 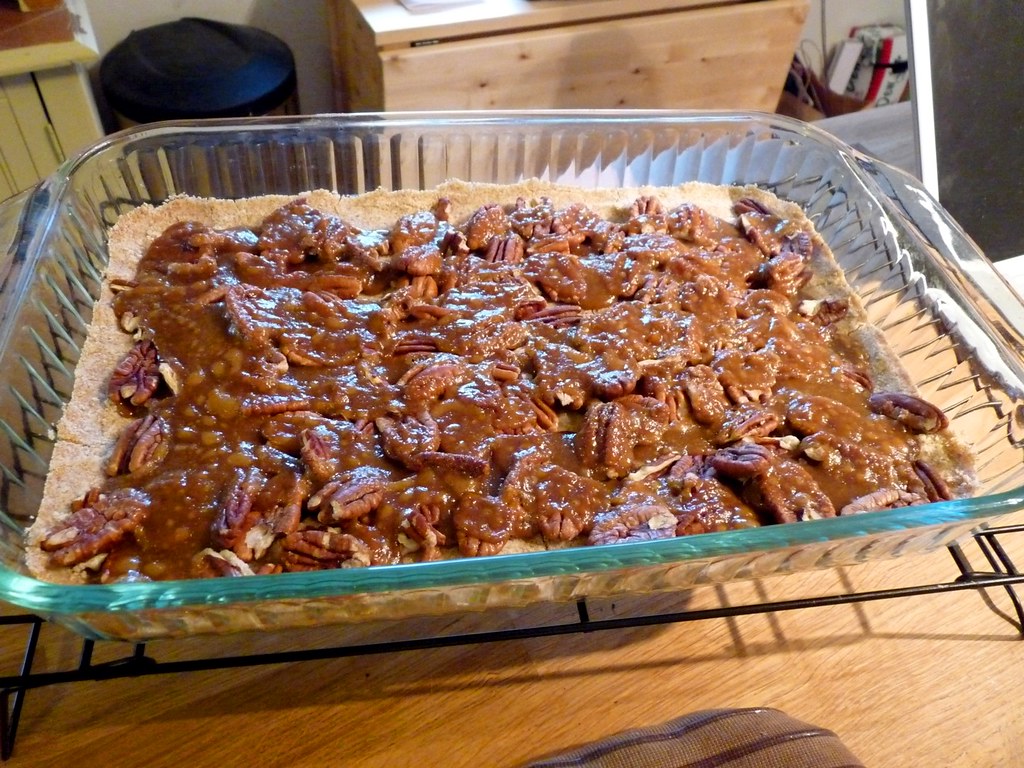 I baked it for 18-20 minutes, until it started to bubble. The caramel layer didn’t spread out much more in the oven, and the crust stayed grainy looking. 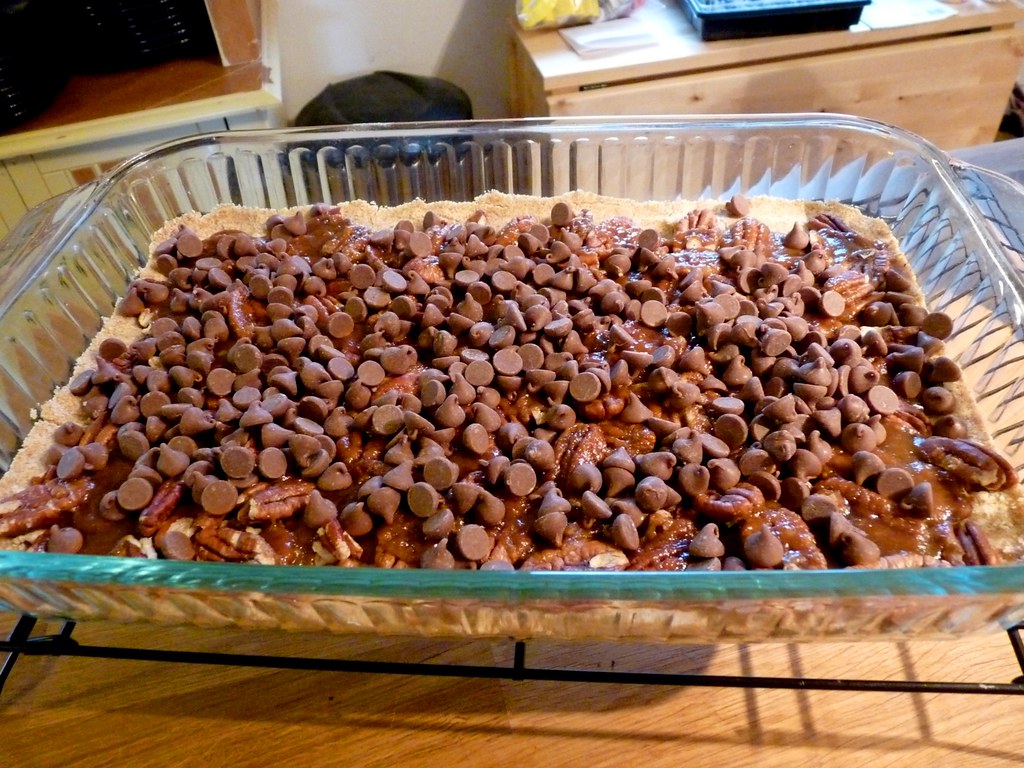 I put the chocolate chips on top and waited for them to start to melt, and then spread them out with an offset spatula. This is pretty much the ONLY recipe I ever use milk chocolate chips for. I almost always substitute semi-sweet or bittersweet because I’m just not a milk chocolate kind of girl. But it just seemed wrong to use anything but milk chocolate in this recipe. 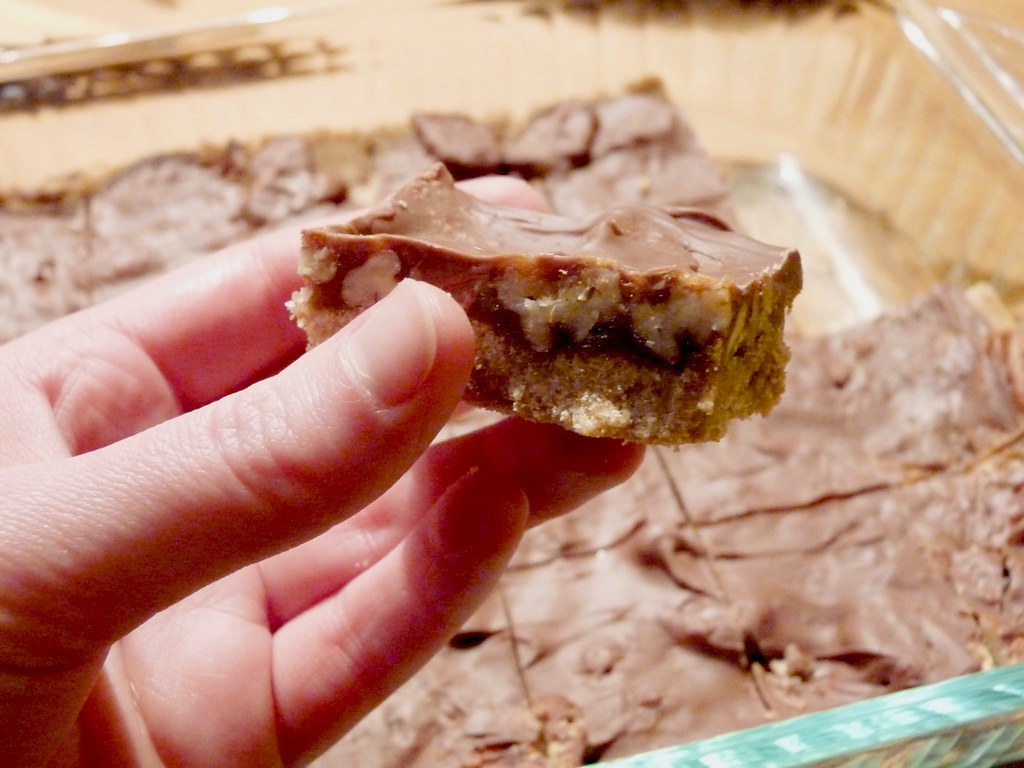 Verdict: (other than being a terrible picture) these bars weren’t bad per se, but they weren’t right. The crust was really crumbly and the caramelly layer wasn’t even or thick enough.

I decided to make these again some time later, with the idea that I would 1.) be more careful about measuring the flour so I wouldn’t end up with too much and 2.) not boil the butter/sugar mixture for as long.

So I set out on the second batch, and measured my flour very carefully. 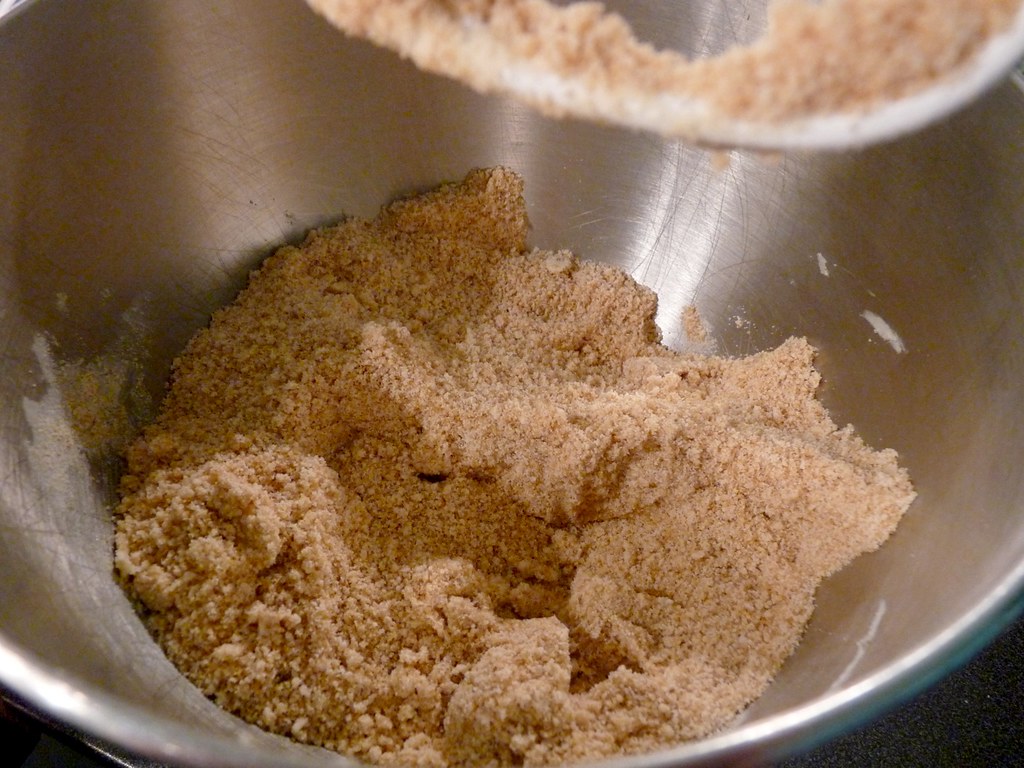 And I ended up with a very similar mixture. Crumbly, with the sugar not really incorporated. So I decided to add some butter. 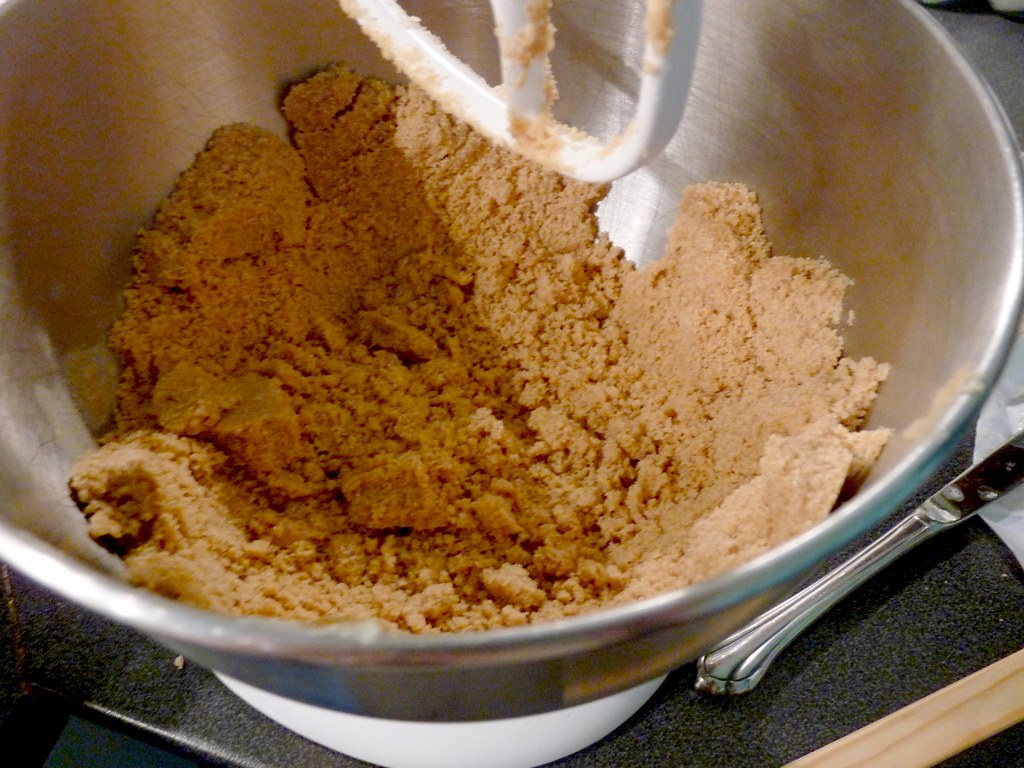 I added 2-3 tablespoons of butter, just until the mixture homogenized and was no longer grainy.

After I made these, I thought to myself, DUH! Cream the butter & sugar together before adding the flour! I made this again and tried it, and it worked. So I guess this should really be called “A Tale of Three Turtle Bars” but that’s not exactly catchy, now, is it? 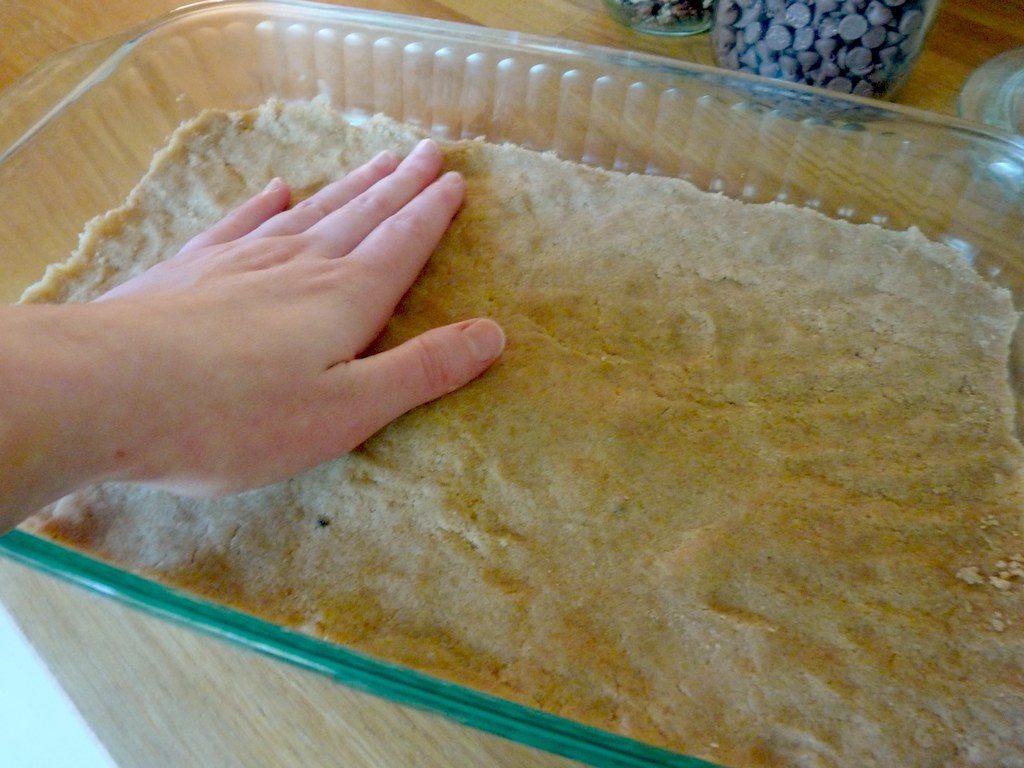 I pressed it into the pan as before. 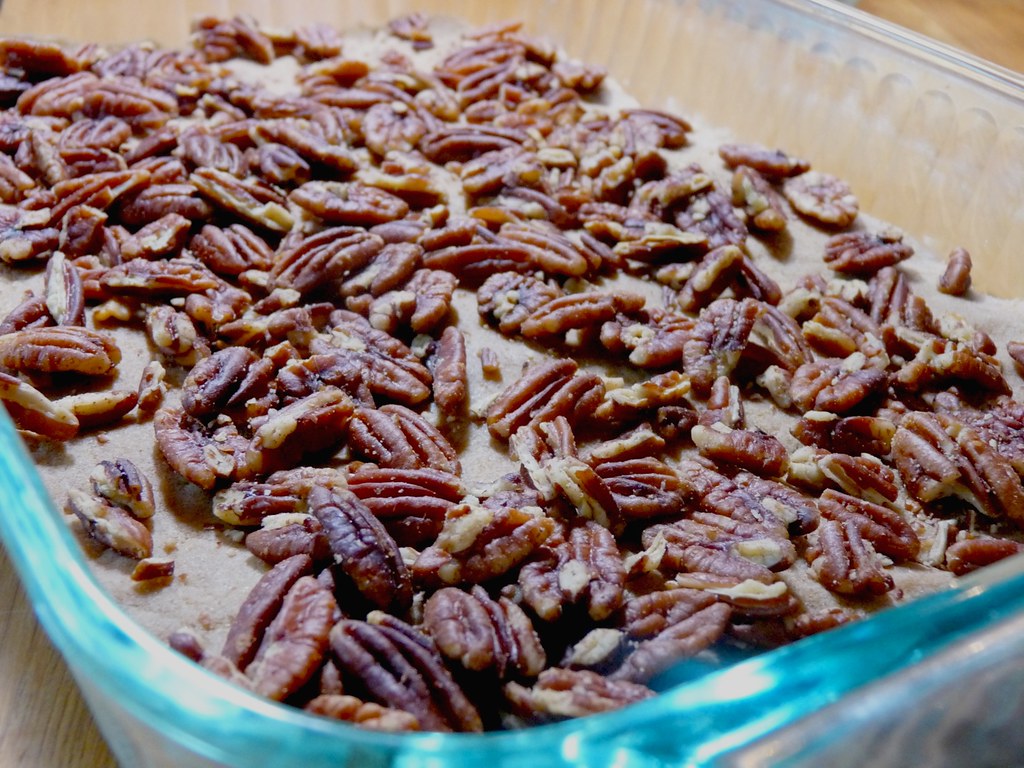 And I put extra pecans in like last time, too. 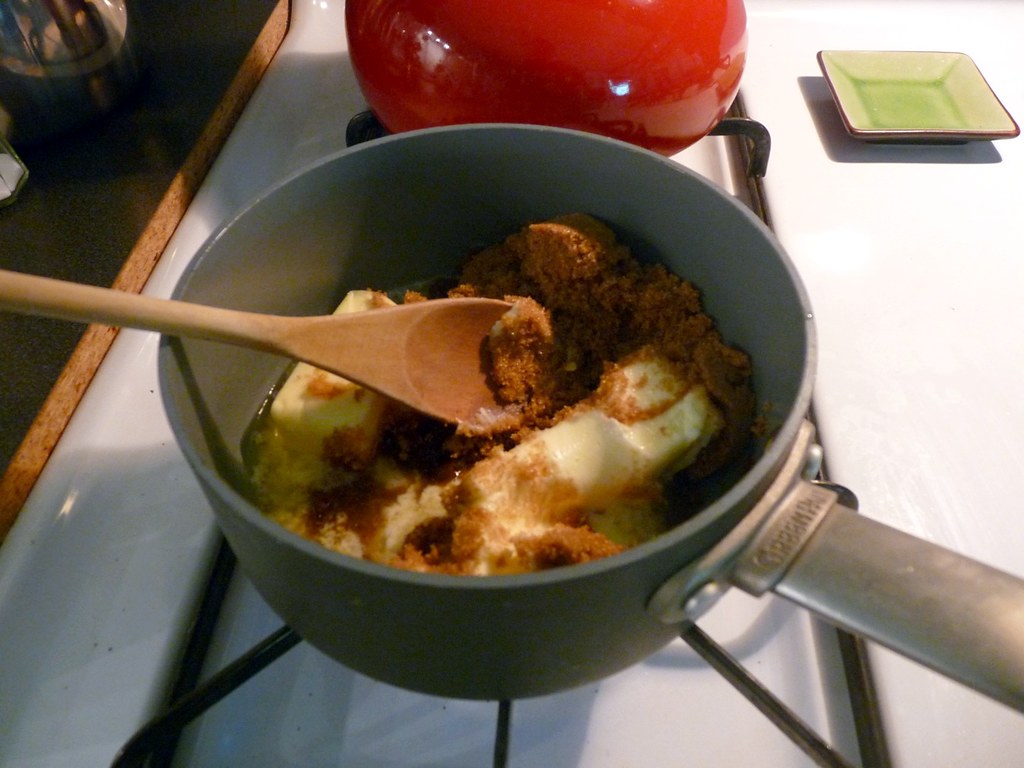 Next was the caramel layer. Even though I planned to boil it less than the time before, it was completely different than the first time. It was much thinner. When I went back and looked at all the photos together I realized why. 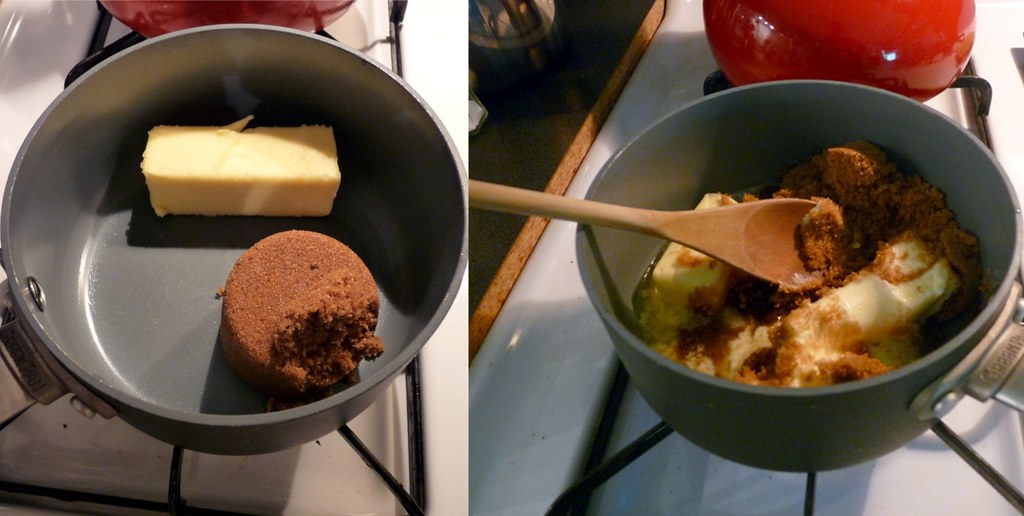 Notice anything? Like how there’s a ton more butter in the second batch? Yeah, that’s because apparently the first time around, I measured 2/3 of a stick of butter instead of 2/3 of a cup of butter. Which means I used half of the amount of butter that I needed. I’m a total dork sometimes. 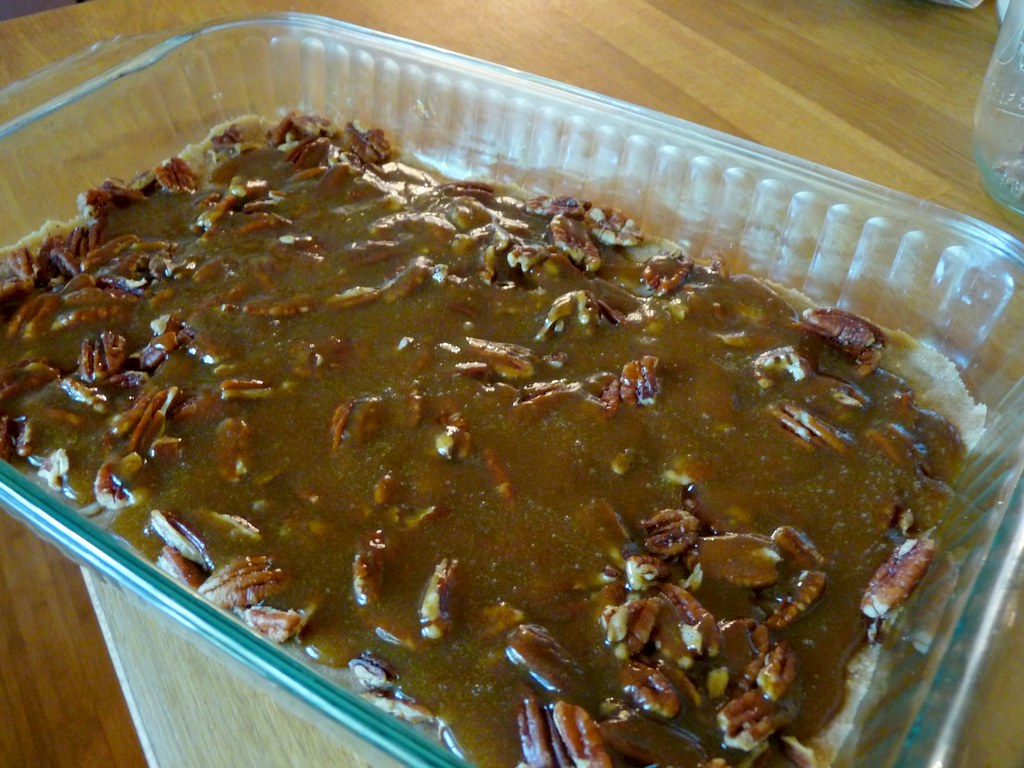 This is what it’s meant to look like after you pour the butter/sugar mixture over the pecans. It should cover them pretty well and reach almost to the edges. 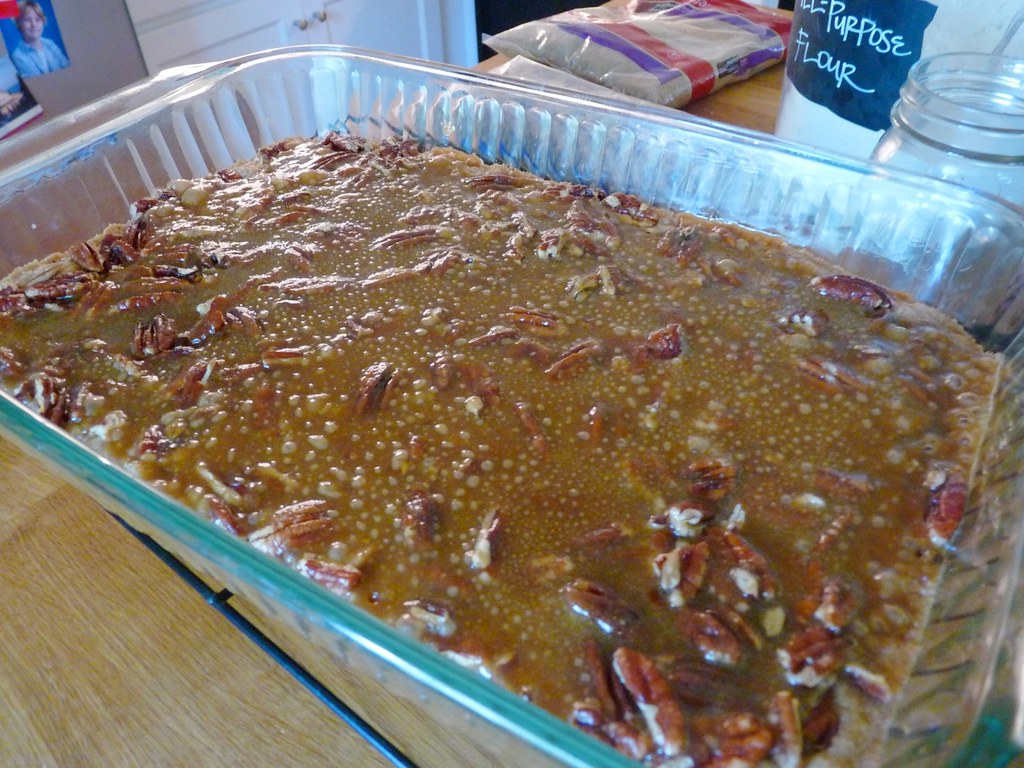 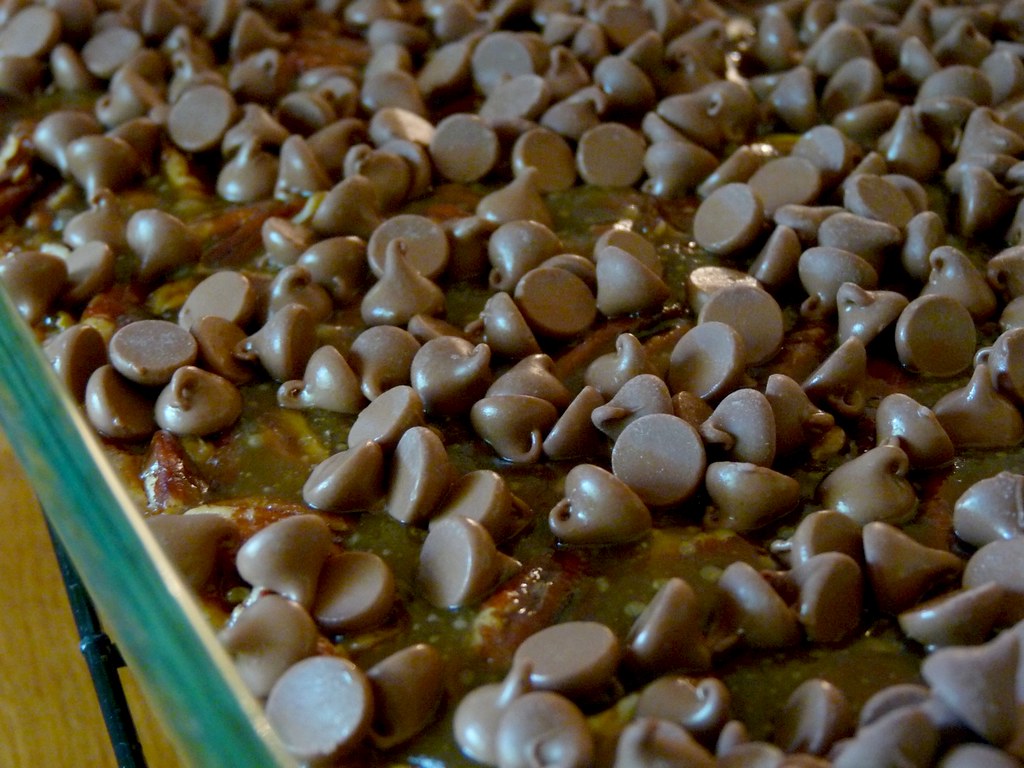 Sprinkle the chocolate chips on top right away and wait until they start to get shiny. Then you’ll know they’re melted enough to spread. 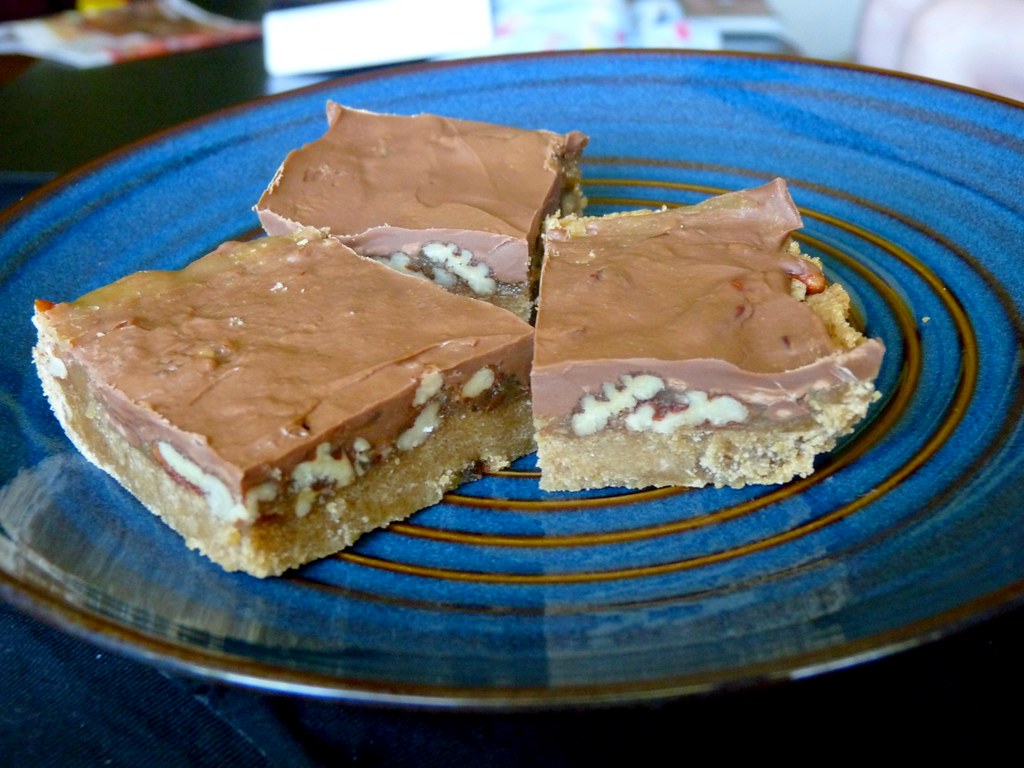 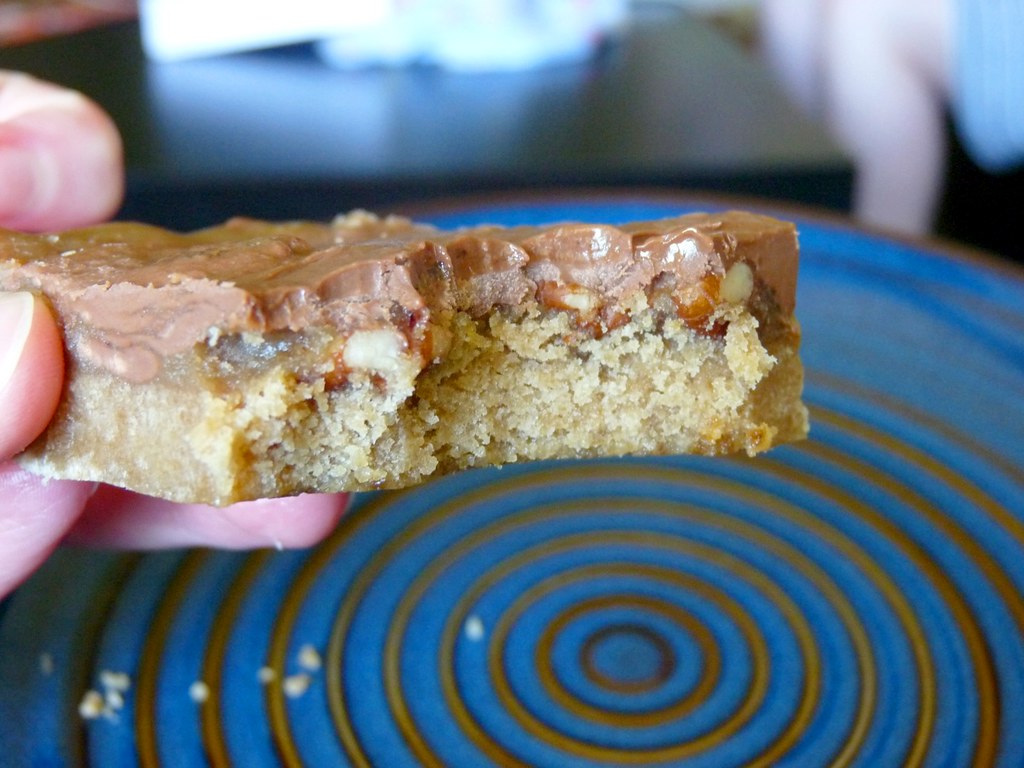 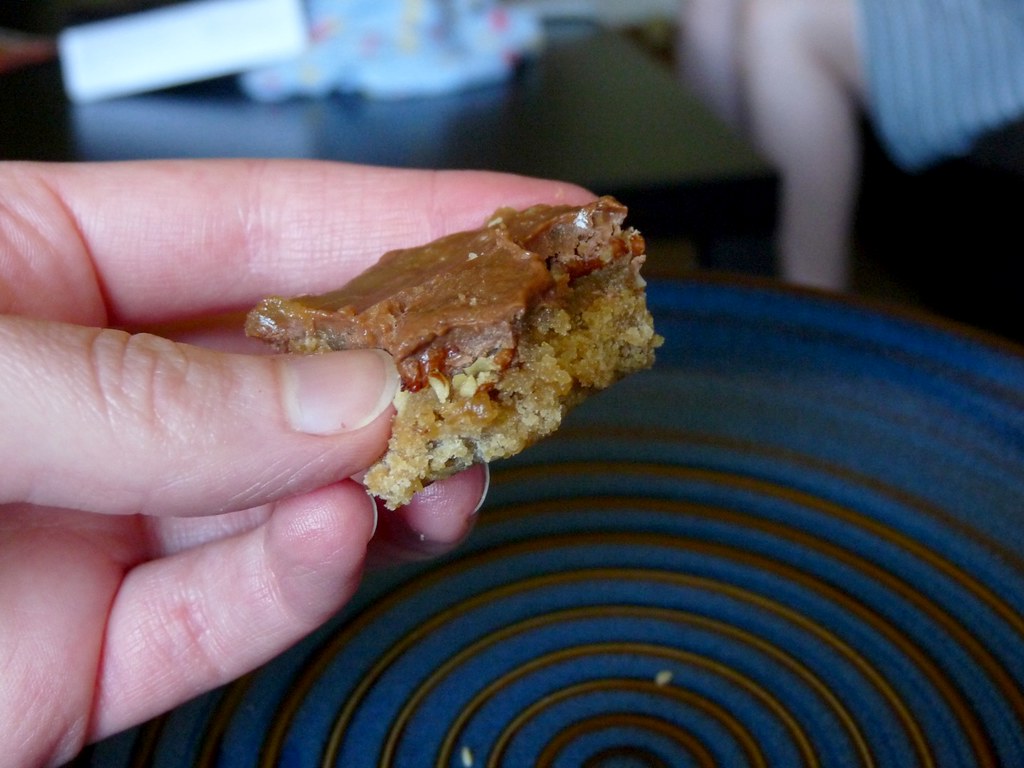