Cooking, Decorated Cookies, Sweets
Pin20
Share1
Tweet
The links in this post may be affiliate links. This means I may receive a small commission if you buy through these links, at no additional cost to you, which helps me run this blog. Read my disclosure here.

Ok, true confession: I’m kind of a geeky girl. I mean, I don’t go to conventions, but I grew up on Star Trek: The Next Generation, am an avid Doctor Who fan, still mourn the cancelling of Firefly, and watch dumb SyFy movies for fun. The latest sci-fi related thing I’m getting into is Steampunk. I realize I’m kind of late to the party on this one. But the more I read Epbot, the more I’m loving it.

But since I don’t go to conventions and the husband hates costume-related parties of any kind, there’s a limit to the useful steampunk crafts I can make. But then I realized steampunk would be a wicked cool theme for Valentine cookies. I’ve been crazy excited about making these for weeks, but haven’t had the chance until this weekend. 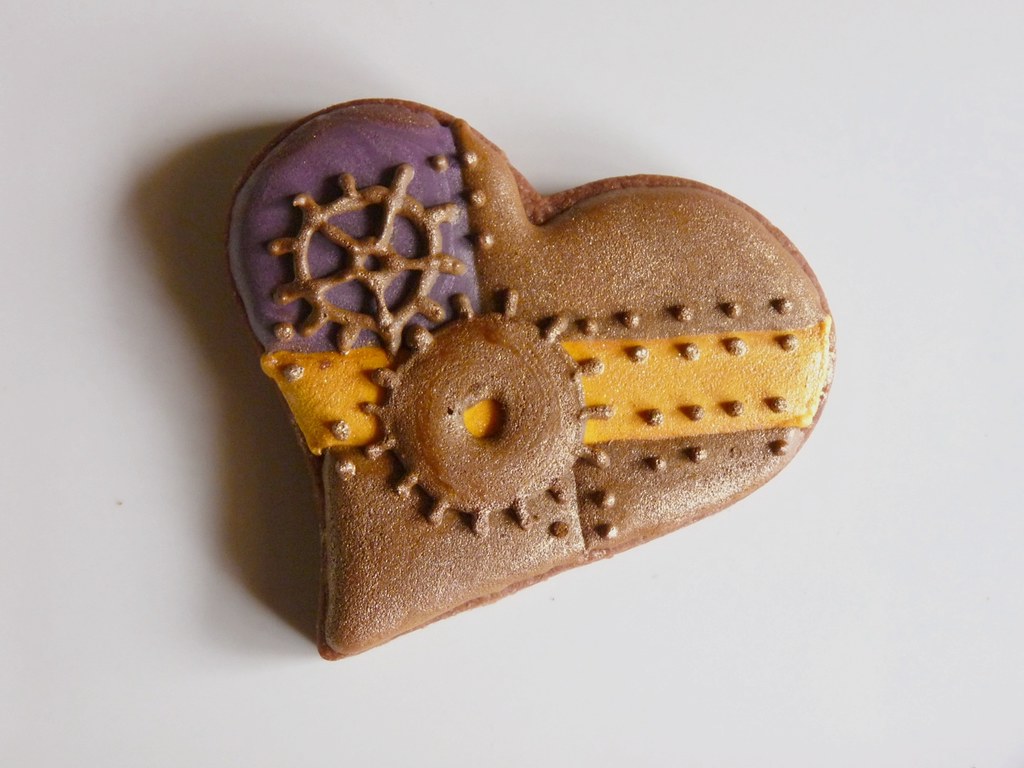 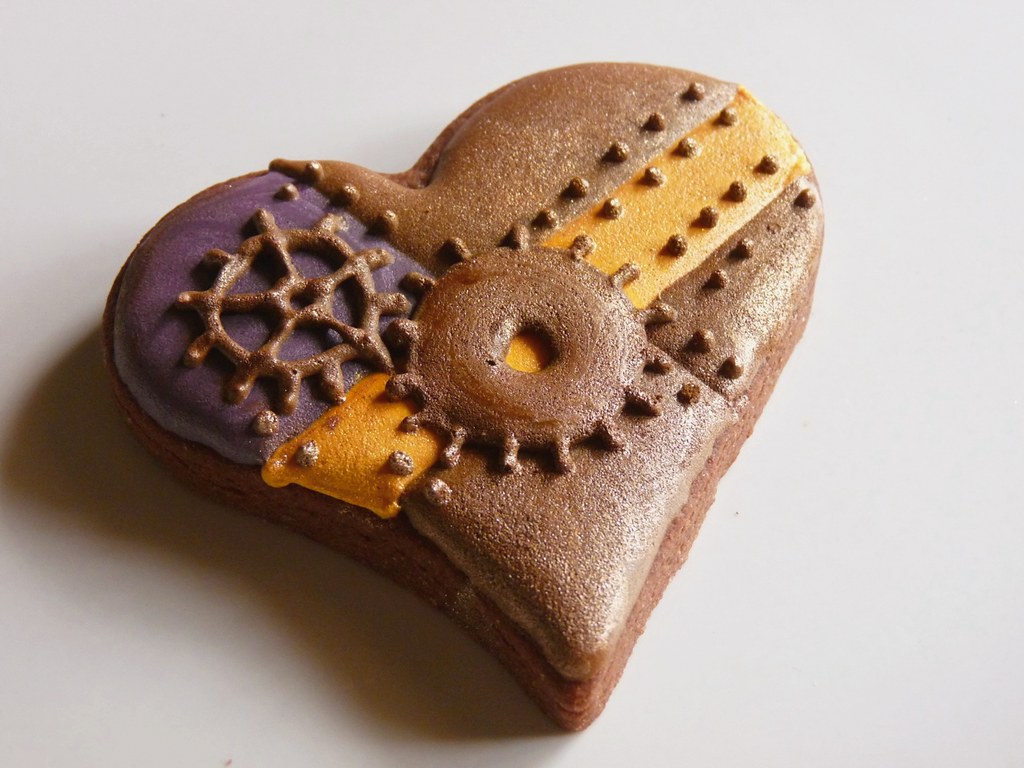 Wikipedia defines steampunk as:  “a sub-genre of science fiction, fantasy, alternate history, and speculative fiction that came into prominence during the 1980s and early 1990s.[1] Steampunk involves a setting where steam power is still widely used—usually Victorian era Britain or “Wild West”-era United States—that incorporates elements of either science fiction or fantasy. Works of steampunk often feature anachronistic technology, or futuristic innovations as Victorians might have envisioned them, based on a Victorian perspective on fashion, culture, architectural style, art, etc.” 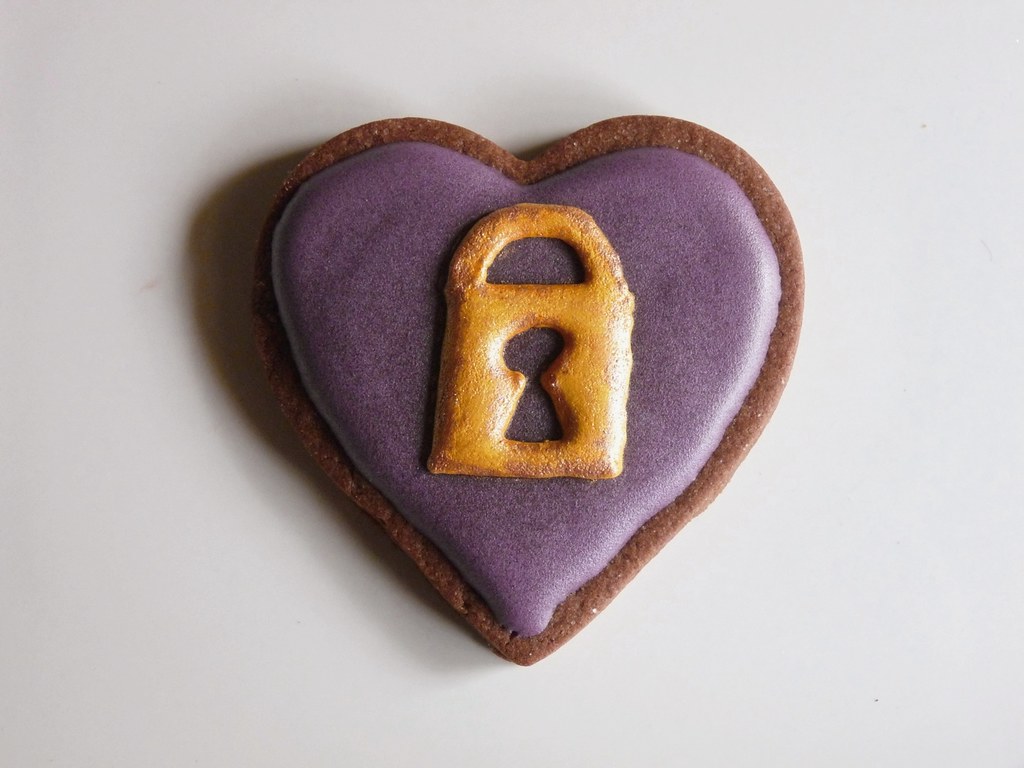 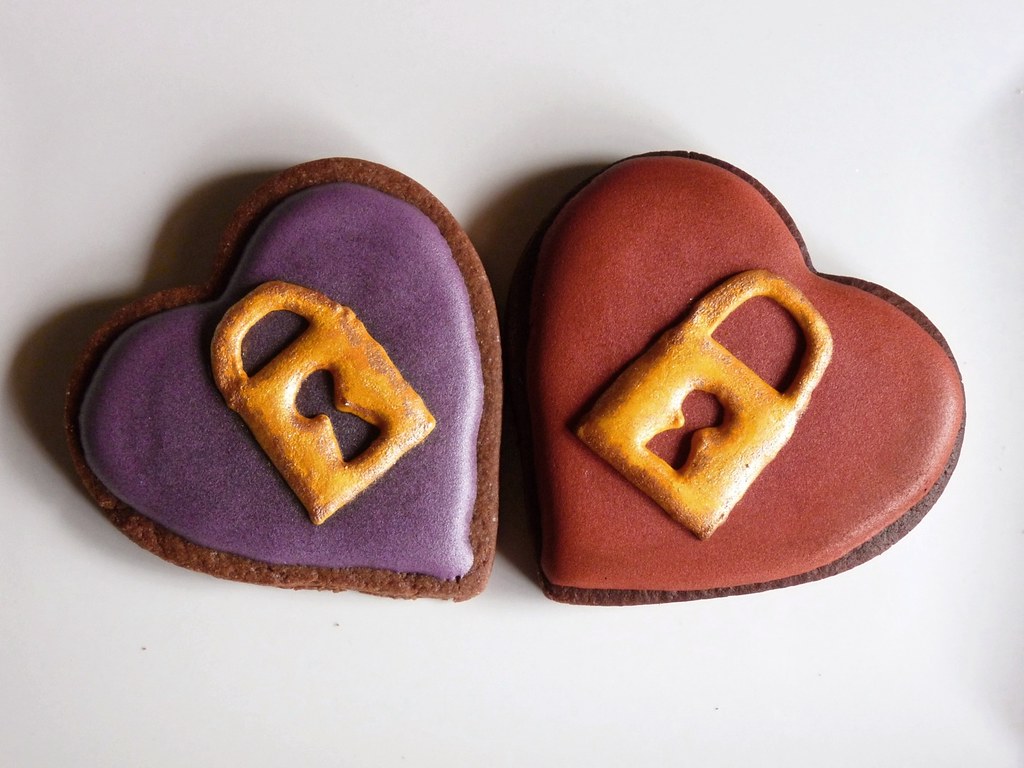 We used two consistencies of royal icing– piping and 20-second. The more I use 20-second icing, the more I want to use it always. It doesn’t work with every application, like if you want to use flood-on-flood to make designs.

For our piping icing, we thin royal icing slightly– until it doesn’t hold a stiff peak– and for 20-second icing, we thin the icing until a line drawn in it with a knife disappears after 20 seconds. 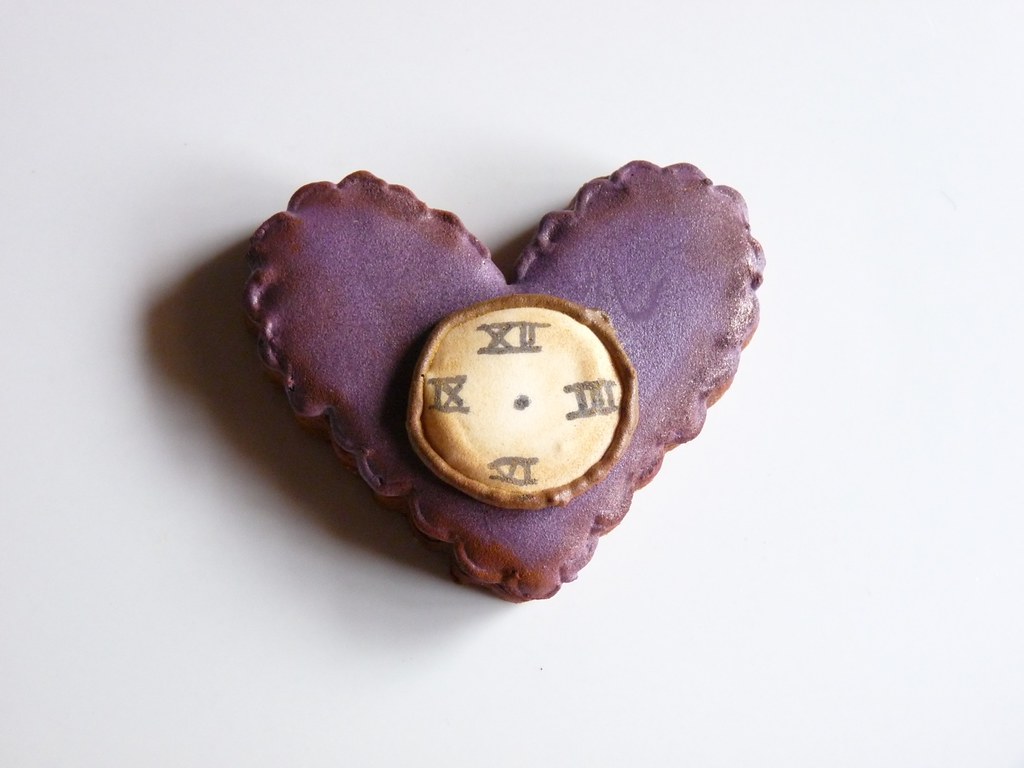 For the fine details, we used food color markers. 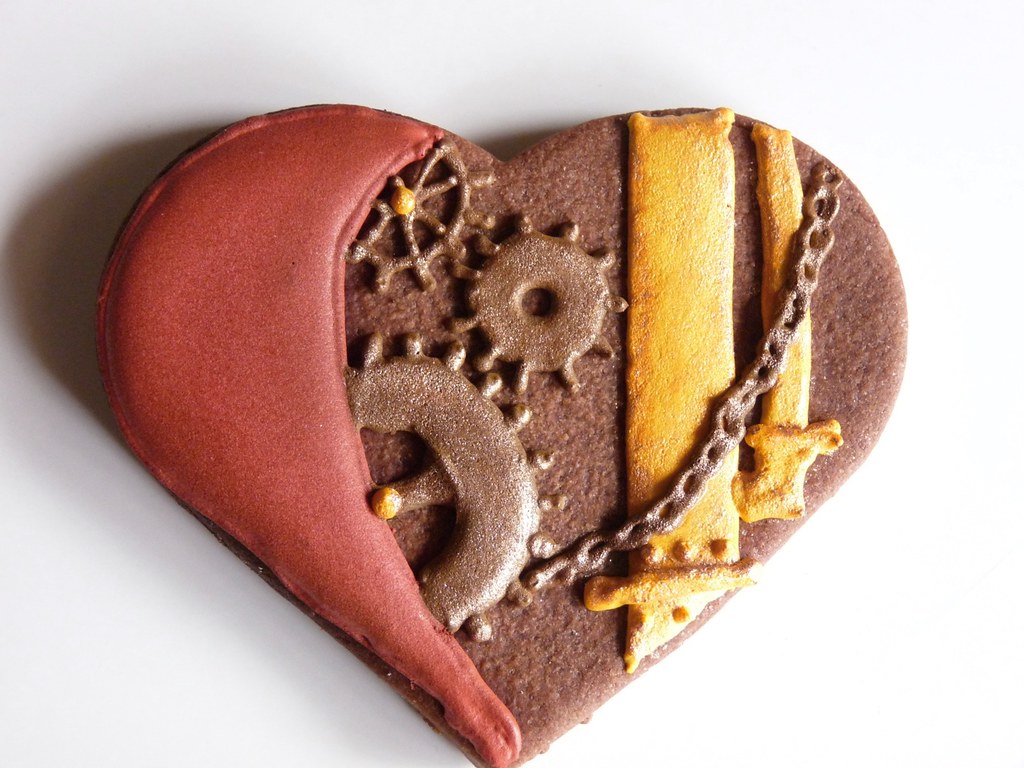 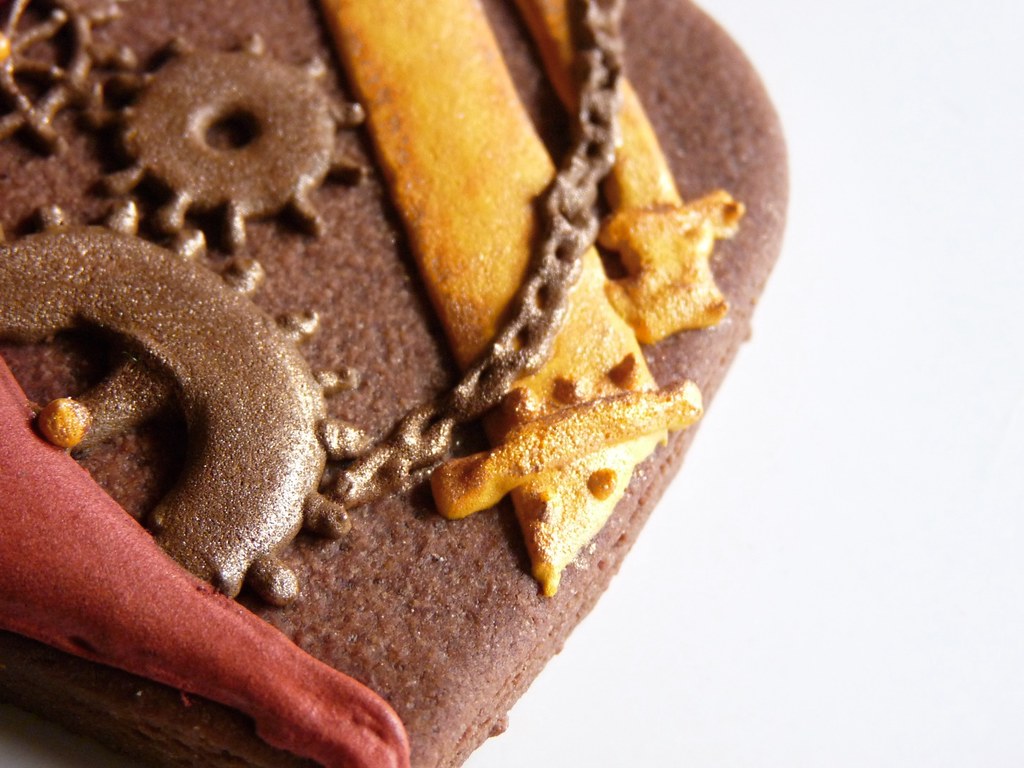 After we did the initial piping, we wanted to make them look antique, as well as to make parts of them look metallic. To do this we used two different kinds of dusts. To give things a metallic look, we used gold and bronze luster dust (or pearl dust, depending on the brand.) To get a metallic affect, mix it with either a clear extract or vodka (as little as possible!) and paint it on with a food-grade paint brush. 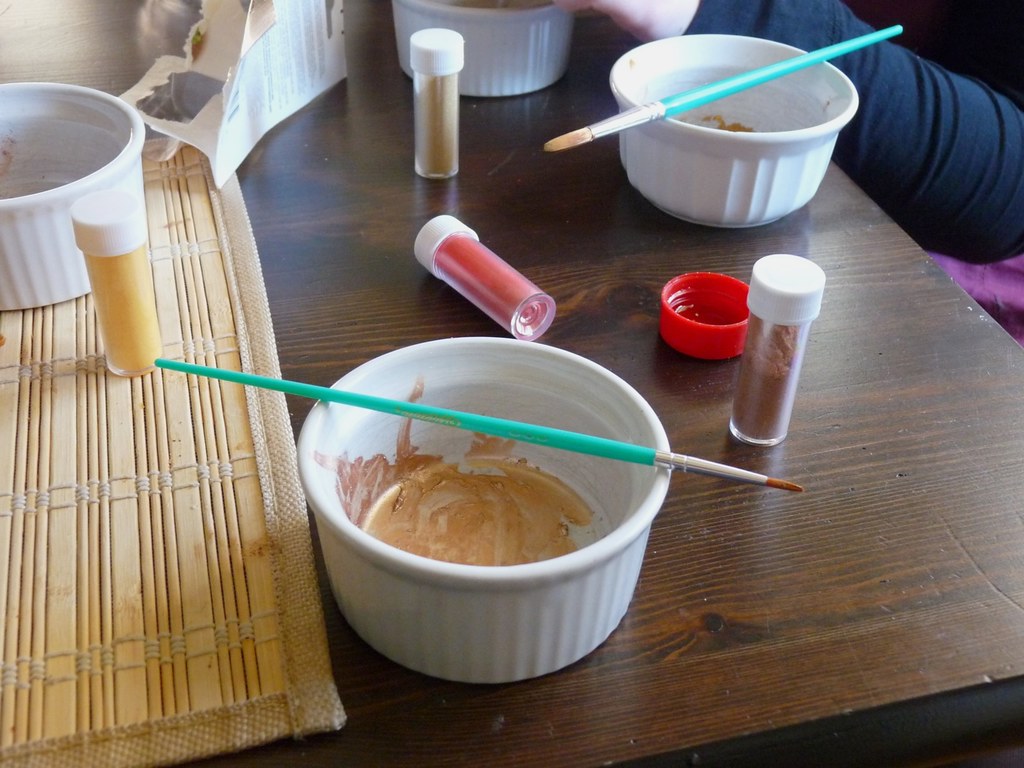 You have to let the icing dry overnight before you do this, and then still be very careful because the alcohol can erode the icing. That’s also why you want to use as little of the alcohol as you can in the mixture. 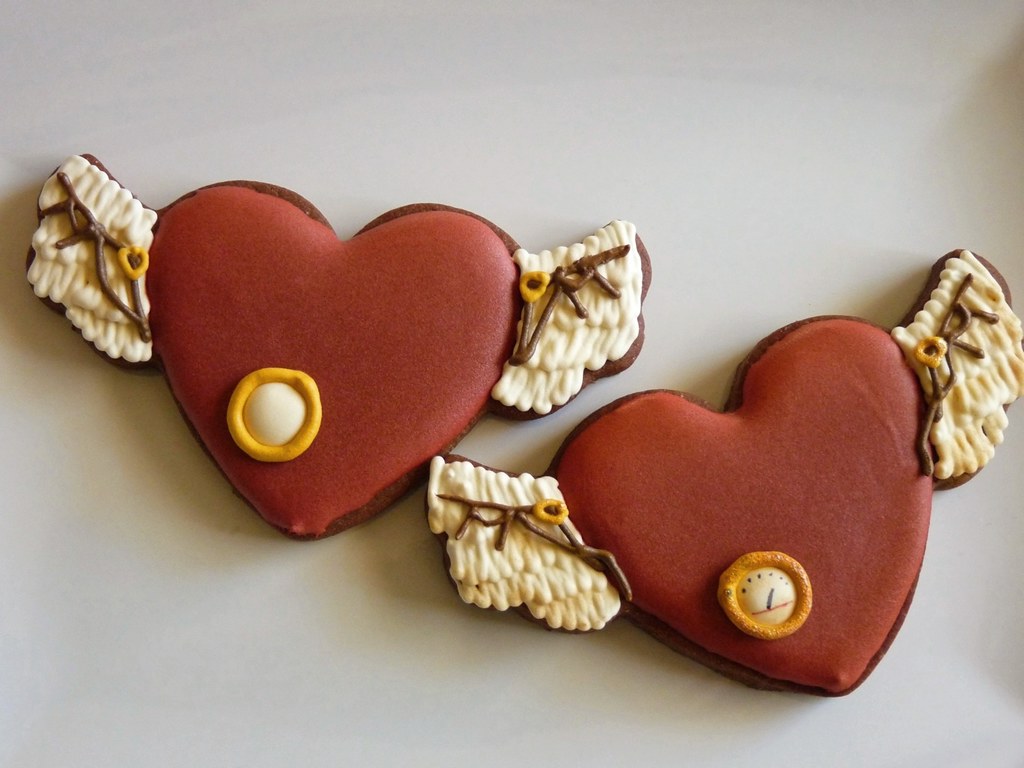 We used dry petal dust, or color dust (again– brand) with a dry paint brush in brown and yellow to make the cookies look antique. (See the wings on the before & after picture above.) 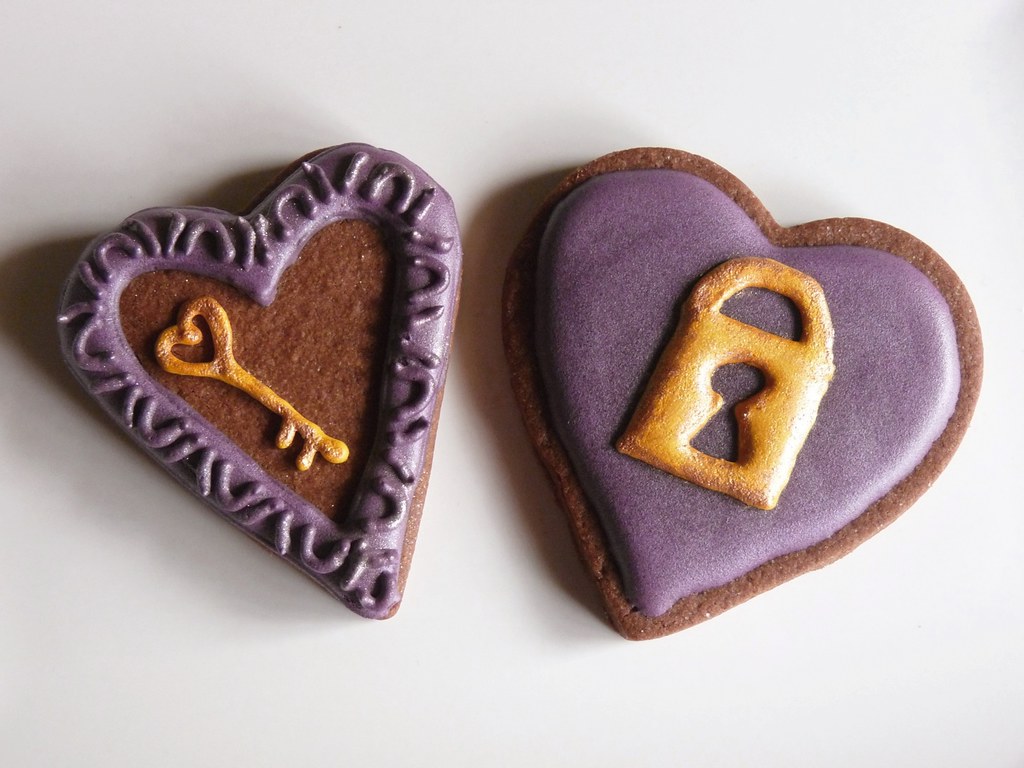 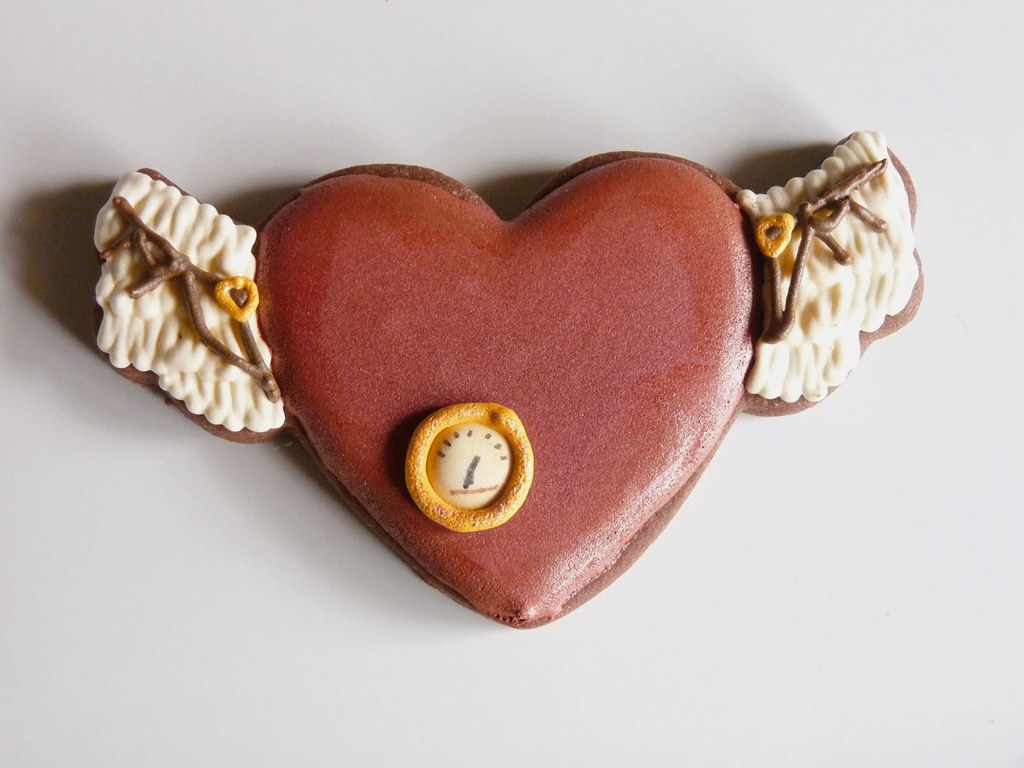 I think this one ended up being my favorite. 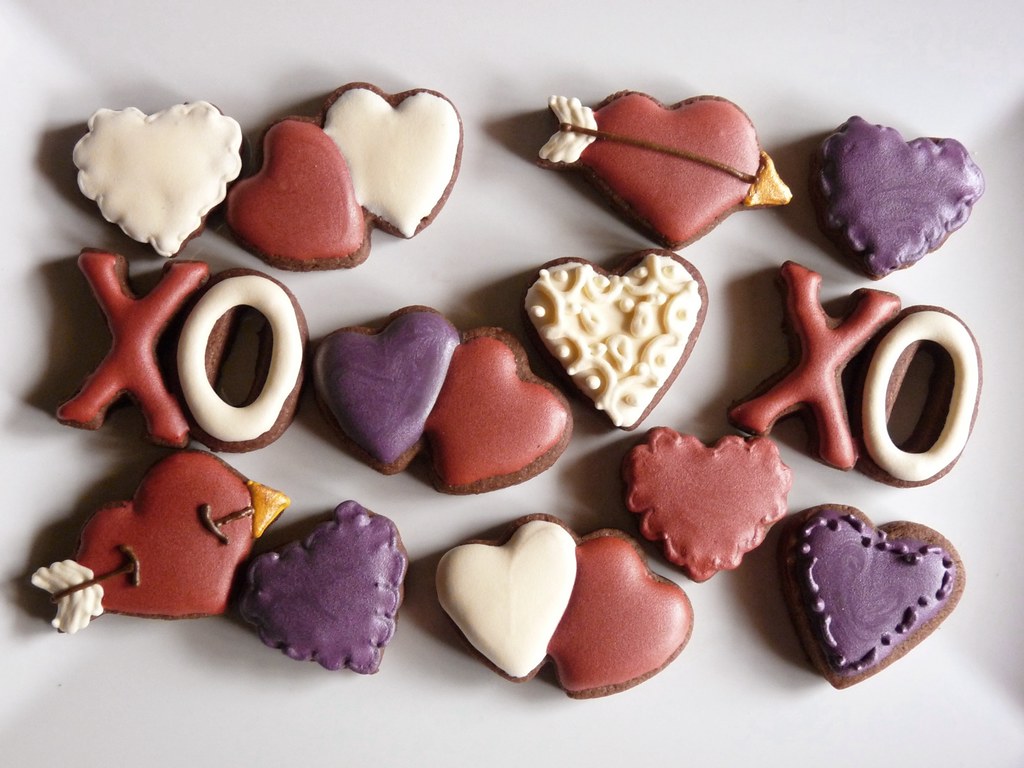 As a bonus, we made a bunch of these mini cookies. 🙂 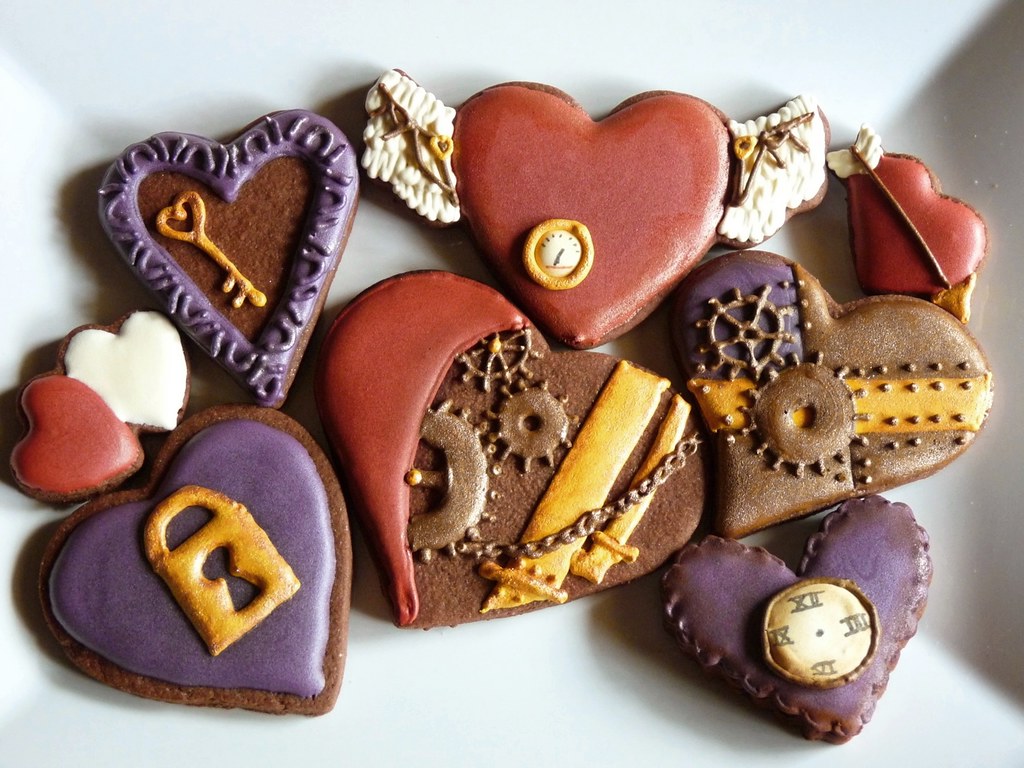 Hope these inspire you!