Cooking, Sweets
Pin2
Share
Tweet
The links in this post may be affiliate links. This means I may receive a small commission if you buy through these links, at no additional cost to you, which helps me run this blog. Read my disclosure here. 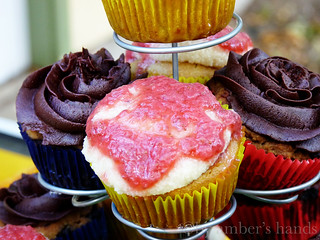 In keeping with the rest of the snacks at the party, these are gluten-free, dairy-free, egg-free and free of refined sugars.

So here’s the recipe:

In a large mixing bowl, whisk together dry ingredients. In separate bowl (or large measuring cup) whisk together wet ingredients. Pour wet into dry and mix until fully incorporated, but don’t overmix. Divide the batter equally among the muffin cups and bake for 20 minutes or until lightly golden on the top. Let cool completely before filling, but try to fill & serve soon after they’ve cooled so they don’t become dry.

1 lb. strawberries
juice of half a lemon
2 Tbsp honey (or more to taste)

Rinse and remove greens from strawberries and cut into large chunks. Put strawberries, lemon juice, and honey in a medium saucepan over medium-high heat. Heat to boiling. When strawberries start to soften, mash with a potato masher. Continue to boil, stirring constantly, for about 10-15 minutes. The mixture will foam, and then as it gets to the right consistency, much of the foam will dissipate. You want the final product to be like a thin jam. One way to check the consistency is to put a small plate in the freezer as you cook this. When you think it may be done, turn off the heat and put a small amount on the plate. Return to the freezer for a couple of minutes until the filling is completely cool. At this point you want it to have gelled somewhat so it’s not runny, but it won’t be as thick as a jam. If it’s not ready, turn the heat back on and boil for 3-5 more minutes and check again. Skim any excess foam from the top and allow to cool before filling cupcakes.

To fill the cupcakes, I used an apple corer to cut out a small hole in the middle of the cupcake. You can also use a knife. Then I just spooned the filling into the holes. 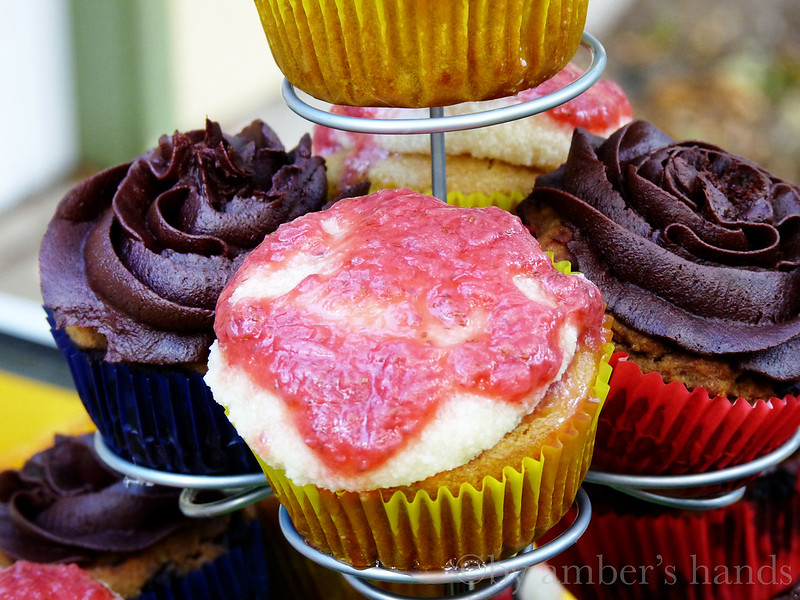 For the frosting, I used this Vegan Coconut Cream recipe from Elana’s Pantry. I had made this frosting once before and it worked well, but when I made it the day of, it didn’t come together right. So it’s a little finicky– make sure you follow the directions really well! I think that my problem was that, since I don’t have a hand mixer, I tried whisking the coconut oil in by hand. I think it wasn’t as incorporated as I thought it was, so as it cooled there are bits of it that stayed separate. I also tried to rush the cooling process by putting it in the freezer. It takes longer to cool than the recipe says, in my experience, so I suggest making this the night before and allowing it to cool overnight before whipping.

That all being said, even in its imperfect state, this is some of the most delicious frosting I’ve ever had. It tastes like coconut caramel. Yum and yum. So I tried not to freak out when it was an hour before the party and my frosting was not coming together. I just went with it and put some of the extra strawberry filling on top so it wasn’t so obvious. Plus it looks intentionally fancy. The show must go on, right?

I haven’t tried this, but I’m pretty sure it would work to adapt this to be more conventional, using all-purpose flour to replace the different flours & starches and using regular yogurt. If you use cow’s milk yogurt you don’t need the vinegar because the acidity is higher. I haven’t tried it, so I can’t vouch for the results, but if you try it, let me know!

Pancit is life!⁠ ⁠ Are you familiar with it? I

Is it too early to talk Valentine cookies?⁠ ⁠

You guys, we are SO CLOSE to getting our bedroom 1

I used to make these appliqué onesies all the tim

Last spring we had a mermaid party for my daughter

When it's cold, nothing quite hits the spot like t

Happy New Year, friends! I hope you enjoyed your h