Crafts, Fabric Crafts
Pin403
Share
Tweet
The links in this post may be affiliate links. This means I may receive a small commission if you buy through these links, at no additional cost to you, which helps me run this blog. Read my disclosure here. 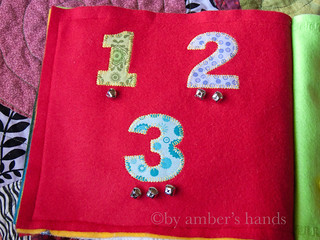 Ok, I was going to do these pages two at a time, but I’m going to be honest with you. I am so sick of writing about this busy book. I mean, I was so excited to show it to you at first, but since I can only manage to get out 1 or 2 posts a week, it’s just been dragging on. And I don’t want it hanging over my head anymore. I want to post about Christmas stuff now. So here are all the rest of the pages with instructions.

Pages 7 and 8 are the clothing pages, made from cut-up jeans & overalls. 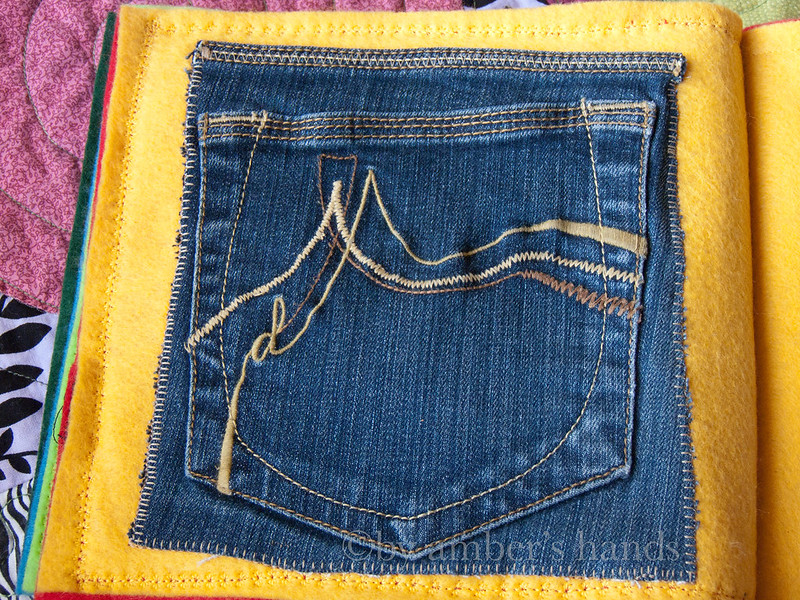 This is the back pocket of a pair of jeans of mine that had a hole in it. I used gold thread to match the jeans. I had intended to sew a ribbon inside the pocket & attach a keychain to it, but ended up deciding that the pocket could be for whatever Little Man wanted to put in there. For his benefit, you know. Not because I didn’t want to do extra work. 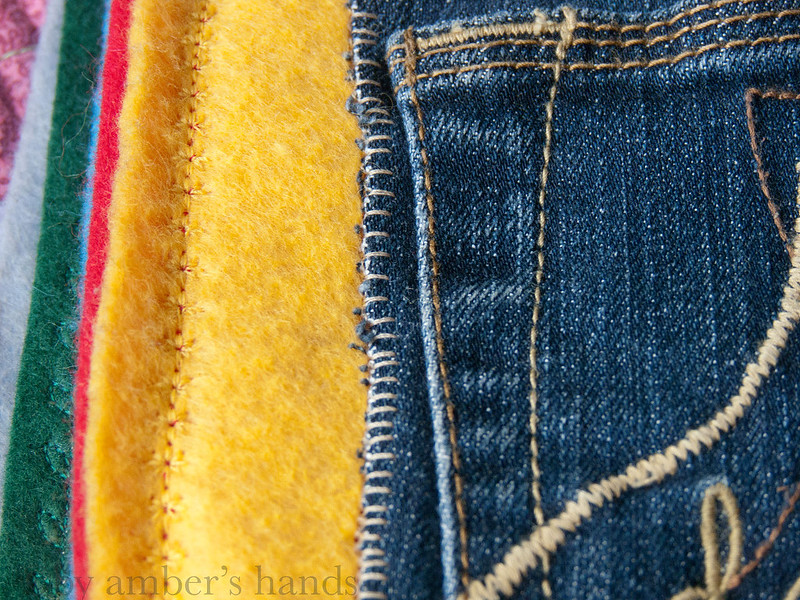 I didn’t do Heatn’ Bond on these pages for some reason, so you can see the edges have just the littlest bit of fraying. I just pinned the pieces on the page & sewed them on. I used a blanket stitch around 3 of the sides. 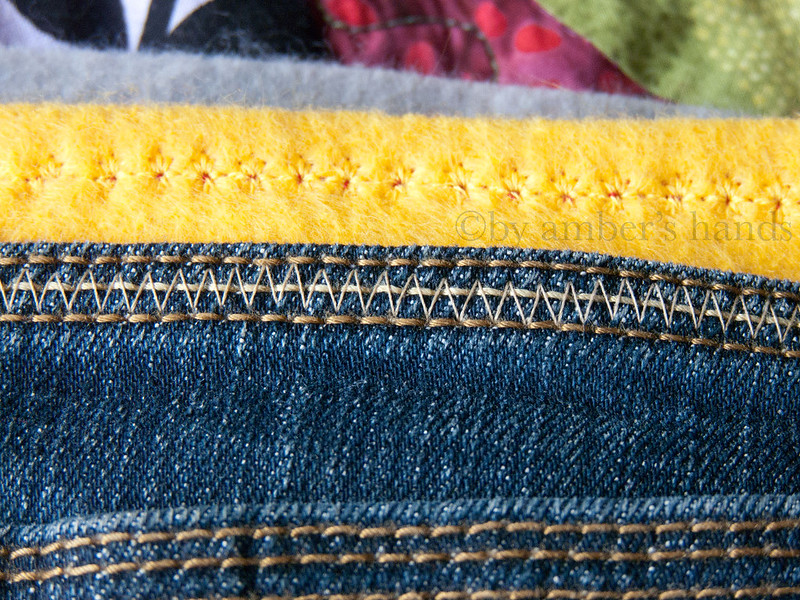 Since the top of the jean piece had a seam on it with a lot of stitching, I decided to use a zigzag stitch to sew it down so it would be easier to get it to stay down while sewing and so the stitch wouldn’t be adding yet another straight stitch. I think it looks like it could have been on the jeans all along. 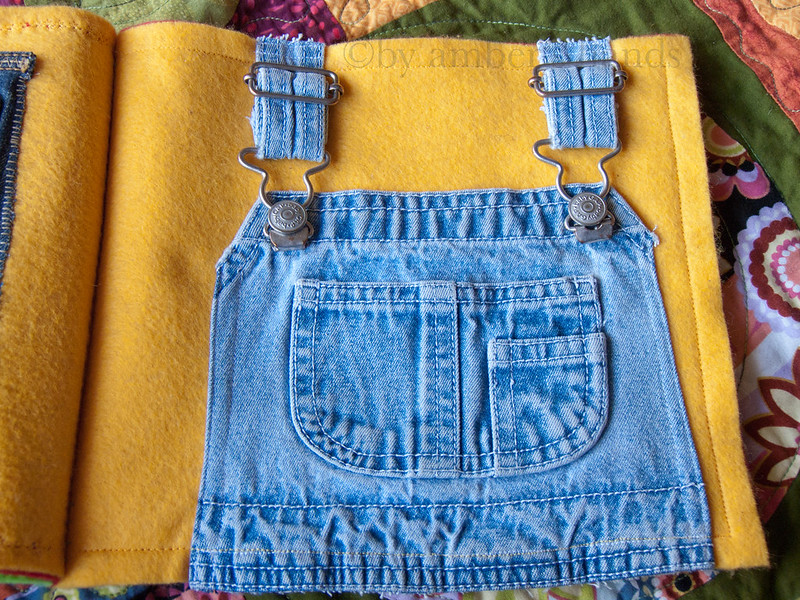 For the overalls, my mom and I cut a pair of old infant overalls apart. Little Man inherited about 500 hand-me-down overalls. He potty trained at about 20 months, and since then, overalls are not the most useful to us. Ha. I picked the ones where the buckle was loosest, since they would be less useful to anyone to wear, and so it would be eaiser for Little Man to use. 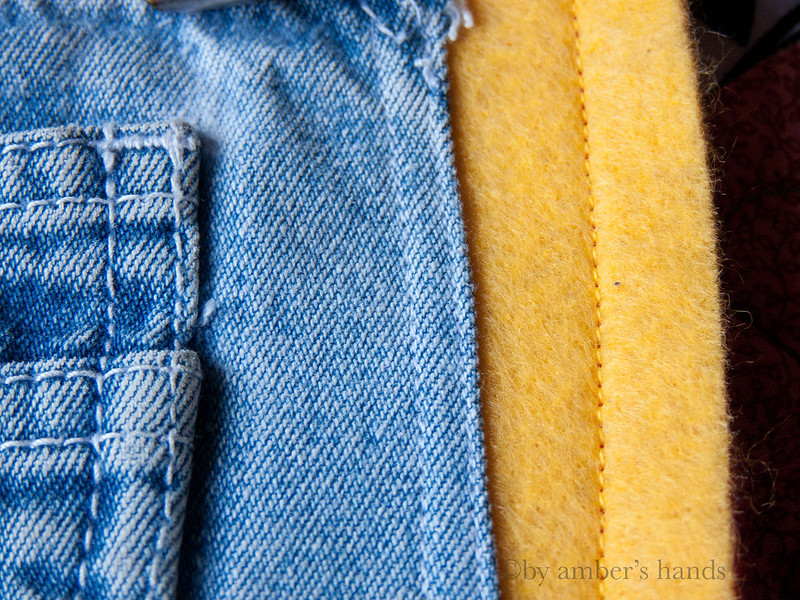 I hemmed the sides of the overalls before putting them on the page. I used white thread to match the rest of it. When I did attach it, I sewed it really close to the edge on the two sides, but didn’t sew down the top. 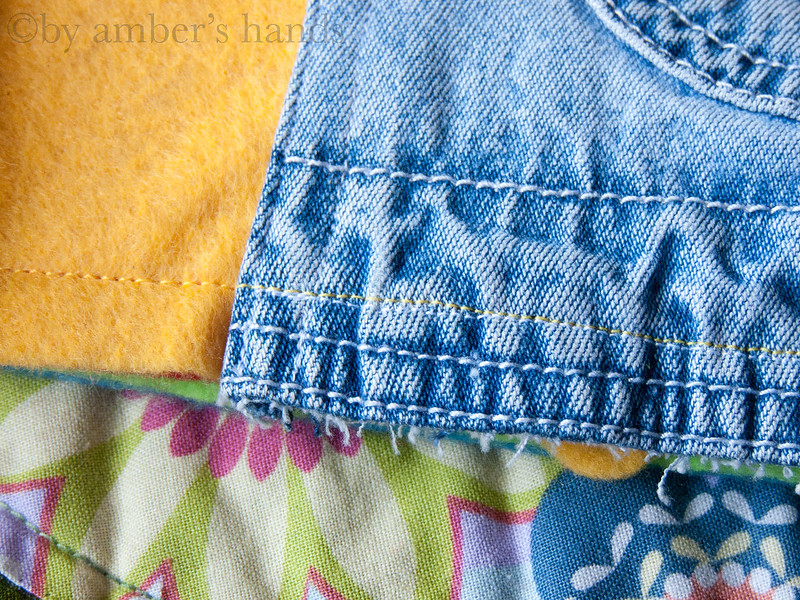 At the bottom, I decided to have the overalls go down to the bottom of the page, but if I were to do it again, I think I wouldn’t. It ended up being really bulky and I had a hard time getting it to line up well with the page when it all came together. As you can see, I sewed it down with white up a bit higher from the edge because it was just too bulky at the bottom to sew through easily. Then when I sewed this page to the page behind it, the stitch landed in the same spot. Ooops. This was also the one page on which I didn’t use a decorative stitch to put the pages together. 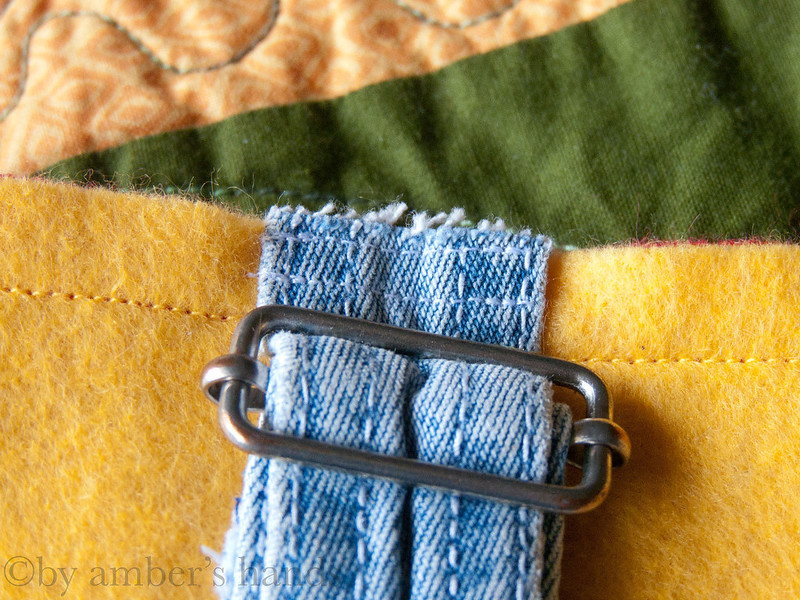 The straps I sewed on with two parallel stitches at the very top of the page to hold them on securely. You move this kind of buckle easily to get it out of the way when you sew it. 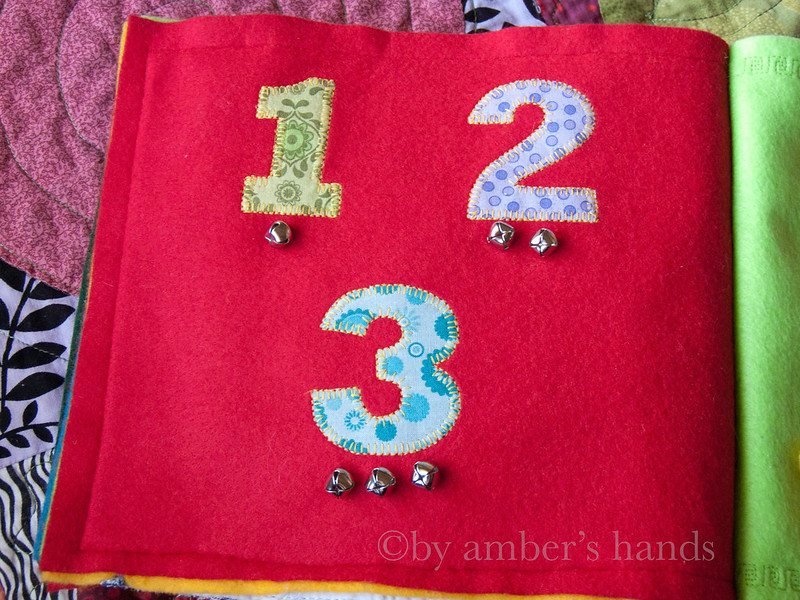 Pages 9 & 10 are the numbers & shapes. For the numbers, I printed out some large numbers on the computer to make a template, then used them to cut out the fabric. Heatn’ Bond again to adhere before sewing. 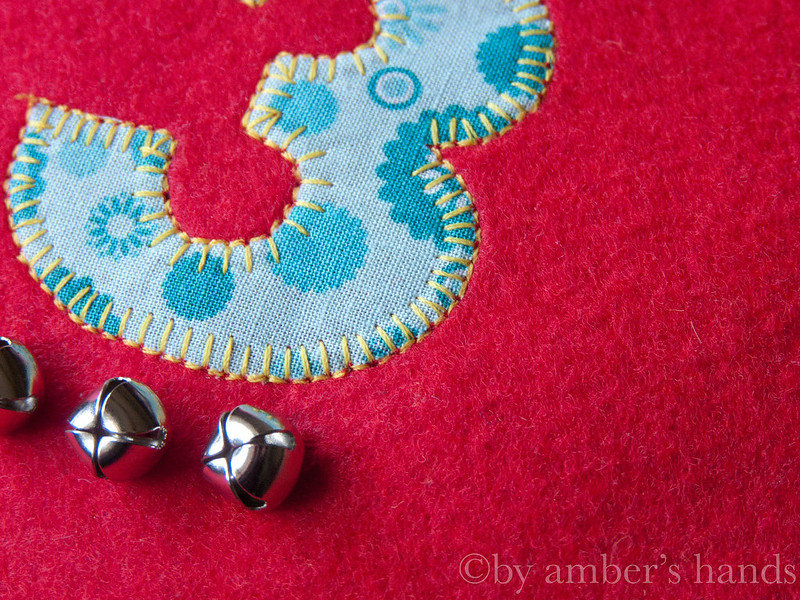 I used the same color thread on all of them because I thought the contrast would be interesting. 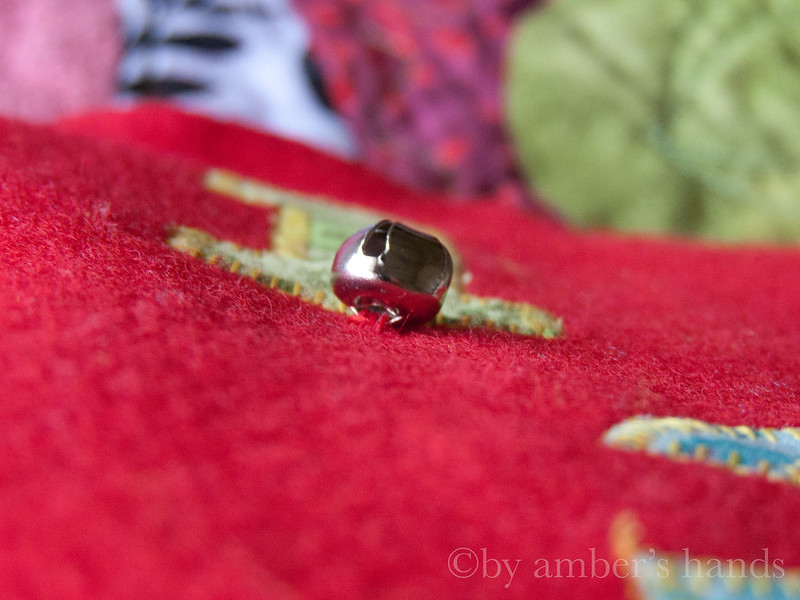 The bells went on after the numbers were stitched. I first used my regular thread, and then the next day Little Man saw it and immediately pulled one of the bells clean off. So I went out and bought heavy-duty thread and sewed the one that fell off, plus I added more stitches to the others. The part that you stitch onto is actually kind of sharp, so it easily cuts through regular thread. 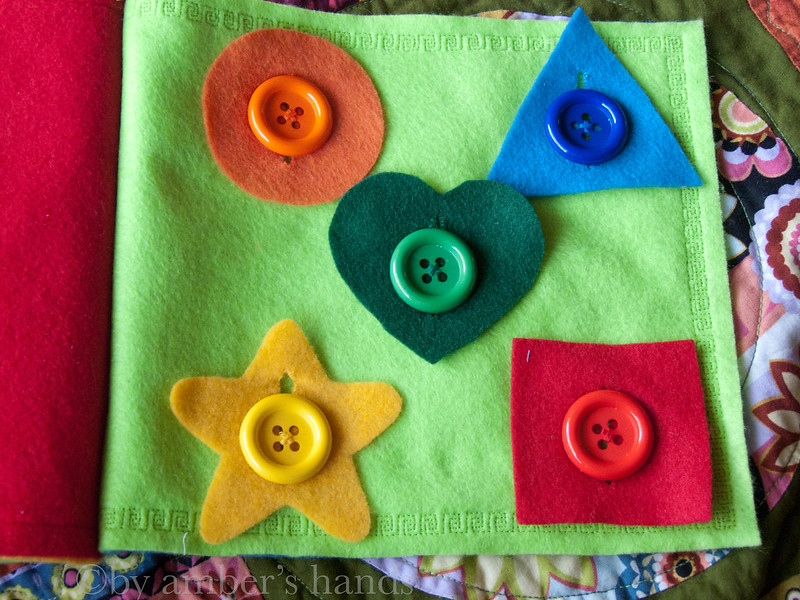 This last page should have been really really simple. Unfortunately, the buttons I chose were too big for my buttonhole foot on my machine. Boo. I ended up having to sew button holes by hand, which I’d never done before. I made templates for the star and the circle, but just free-handed the rest. 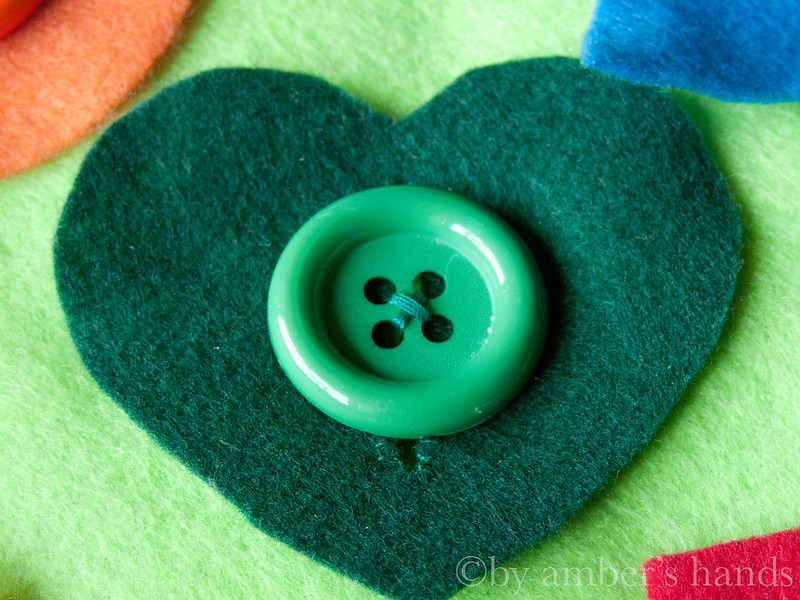 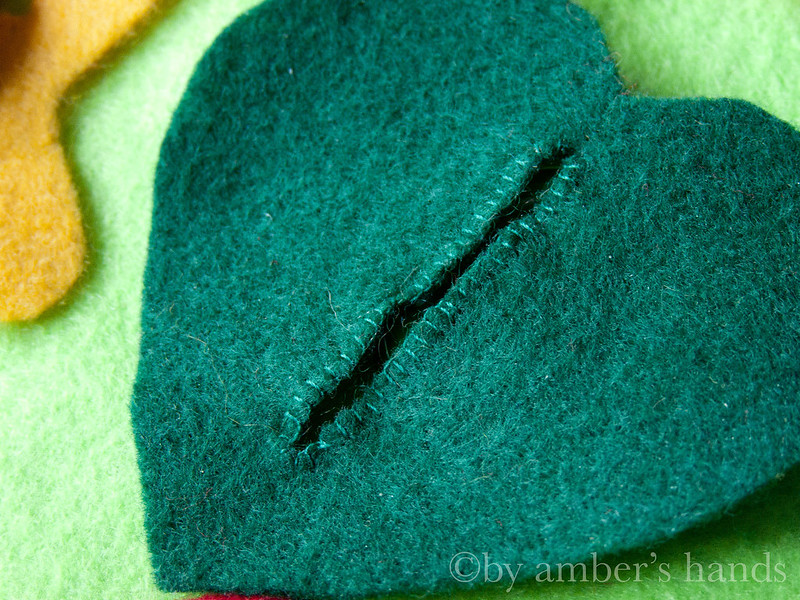 I made the mistake of letting LM play with this page a few times before stitching the buttonholes, and the cut holes stretched out a bit. When I sewed the buttonholes, I used a very small blanket stitch, but put a tiny knot at the top of each stitch to keep it strong. I’m sure there are other, better ways of stitching a buttonhole, but the other one I tried didn’t work for me.

Some notes on putting the whole thing together:

Well, that’s it! When I get a chance, I’ll update the first page’s post to reflect a fix I have to do. But other than that, this is how I did it all!

In case you want to check them out, here are all the other posts on Little Man’s busy book: