Cooking, My Grandma's Recipes, Side Dishes
Pin
Share
Tweet
The links in this post may be affiliate links. This means I may receive a small commission if you buy through these links, at no additional cost to you, which helps me run this blog. Read my disclosure here. 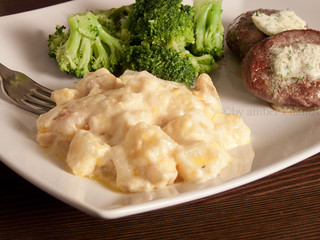 In case you’ve been living under a rock, (or, you know, living in another country where they inexplicably don’t care about American football) this Sunday is the Super Bowl. So that means football, new commercials, half-time show featuring Beyoncé, and food.

I can’t believe that I’ve yet to share this recipe with you in the 2+ years I’ve been blogging.

This is one of my Grandma’s Recipes, and it’s awesome. My Grandma calls them “Hash Brown Baked Potatoes” but around here, and at church potlucks, we just call them “cheesy potatoes.”

But you know me, I can’t leave well-enough alone. So I’m going to give you 2 versions of this recipe. The first, the original, is ridiculously easy and relies on some pre-packaged food. Seriously, you open up some containers, dump it all together, and bake it. The end. This is a great option, especially when you’re short on time.

But I know there are some of you out there who would rather make as much from scratch as possible. So I switched out the pre-packaged stuff for fresh and it’s still an easy recipe, just a little more prep. And you can feel better about it! 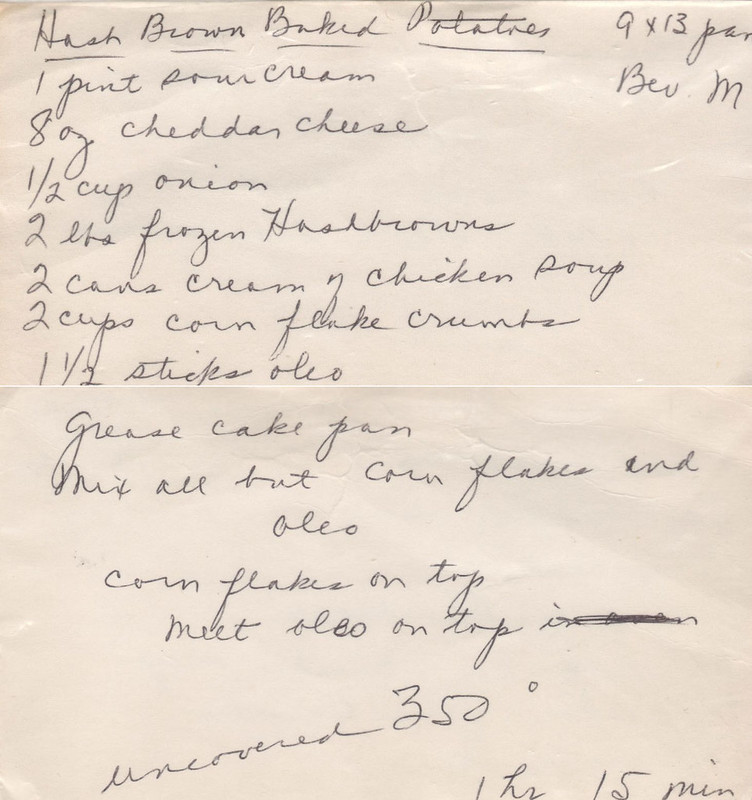 There it is, in my grandma’s own handwriting. In case you’re not familiar, oleo means margarine. But I think my Grandma usually uses real butter. I know I do. Basically, you take a 2 lb. bag of frozen hash browns (I like the diced kind, but you can use the shredded if you want.) and mix it with 16 oz. sour cream, 8 oz. of shredded cheddar, 2 cans of condensed cream of chicken soup, and 1/2 cup of diced onion. I think my Grandma might just sprinkle in some dehydrated onion, cuz that’s her thing. But don’t use a full 1/2 cup of that stuff– just a couple tablespoons, probably. Anyway, you throw that mixture into a 9 x 13 pan and sprinkle 2 cups of crushed corn flakes on top. Then drizzle melted butter over it and bake at 350 for 1 hour 15 mins. It says on this copy to use 1 1/2 sticks of butter over the top. My copy says “use less.” When I make it this way, I only use about 1/2 a stick.

Ok, seriously, it’s the easiest thing ever. If you like easy, by all means use this version. But if you like to know exactly what’s going into your food, here’s another way to make it using fresh ingredients. 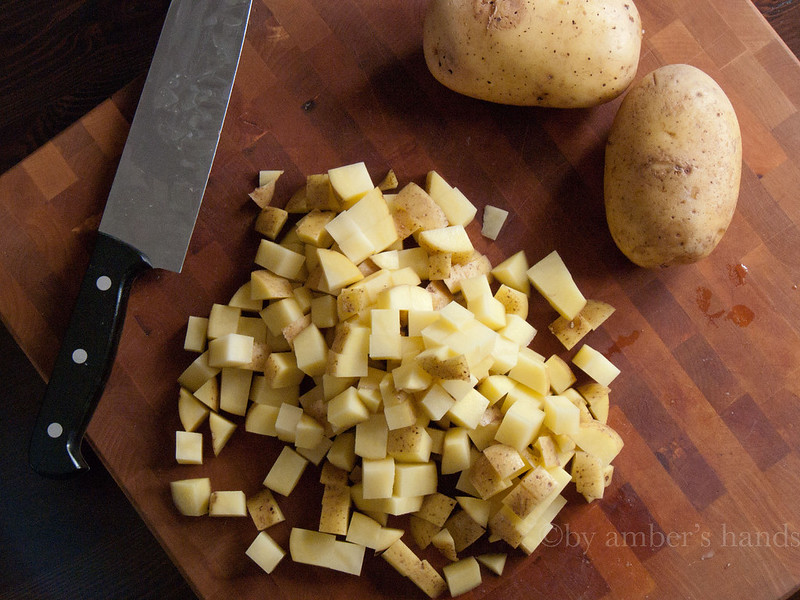 Instead of frozen hash browns, dice up 2 lbs. of fresh potatoes. I had some gold potatoes, so I went ahead and left the skins on. You could do that with red potatoes also, but I wouldn’t suggest doing it for russet. Russet would work fine in the recipe, but I don’t really like the way russet skins bake up in this sort of thing, so I’d skin them. But do whatever you like. 🙂

Now, other than the potatoes, the other major thing we have to make from scratch is condensed chicken soup. To do this, we’re going to start with a roux. A roux is a mixture of fat & flour that you cook together to make a paste. Then you add liquid to it, and it acts as a thickener. This is one of the best methods to thicken a sauce because cooking the flour with some fat first will keep it from creating lumps. A roux is the base for bechamel (white) sauce, some soups, gravies, etc. 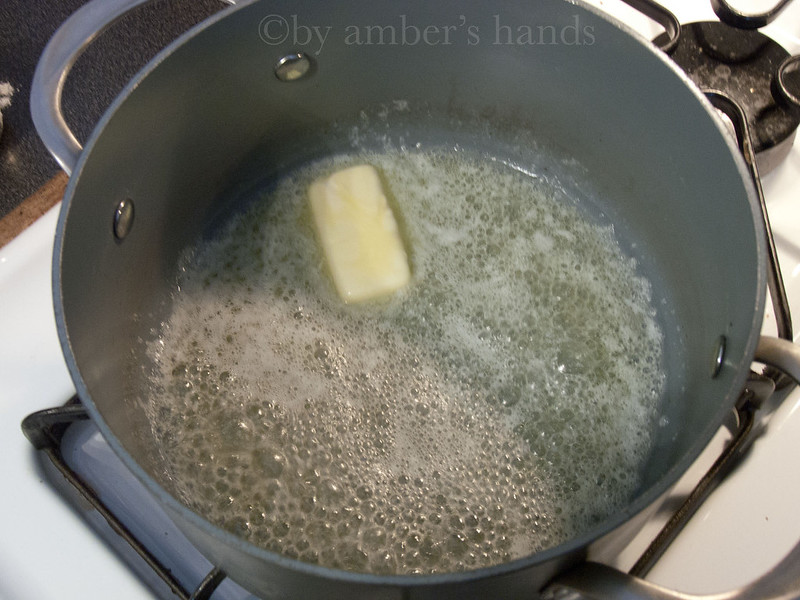 Start by melting 1/4 cup butter in a medium saucepan over medium heat. 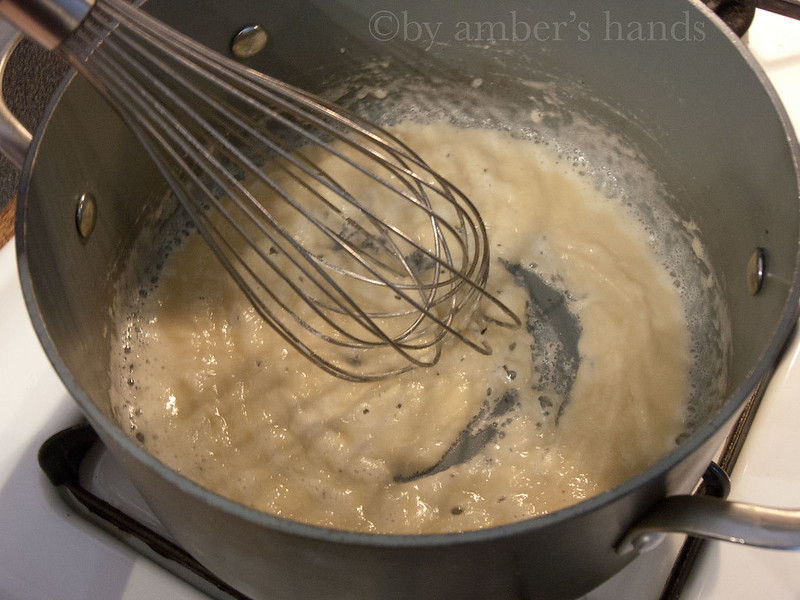 I added a heaping 1/4 cup of flour. You generally want to keep pretty equal portions of fat & flour, but you can fudge it a bit. Since I was making a fairly thick sauce, I upped the flour a little to make sure there was enough thickening power. Whisk it up, and cooking for a minute or two. Cooking it will keep it from tasting overly floury. It’s ok if it gets a little golden, but don’t let it brown. 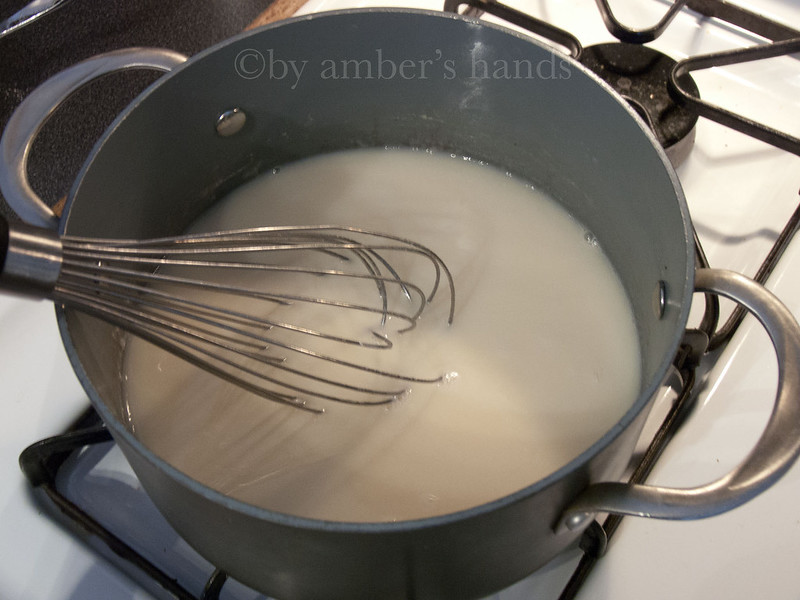 While whisking continually, add chicken stock & milk. I added 2 cups of chicken stock and 1/2 cup of milk, but the finished product was just a little saucier than the original recipe, so I think I’d knock the overall liquid down at least 1/2 a cup. So I’d use 1 1/2 cups of stock & 1/2 cup milk, probably, but the exact ratio of stock to milk isn’t terribly important. Also, and this is important, season with salt & pepper. DO NOT UNDERSALT. The potatoes need adequate salt or they will taste really bland. 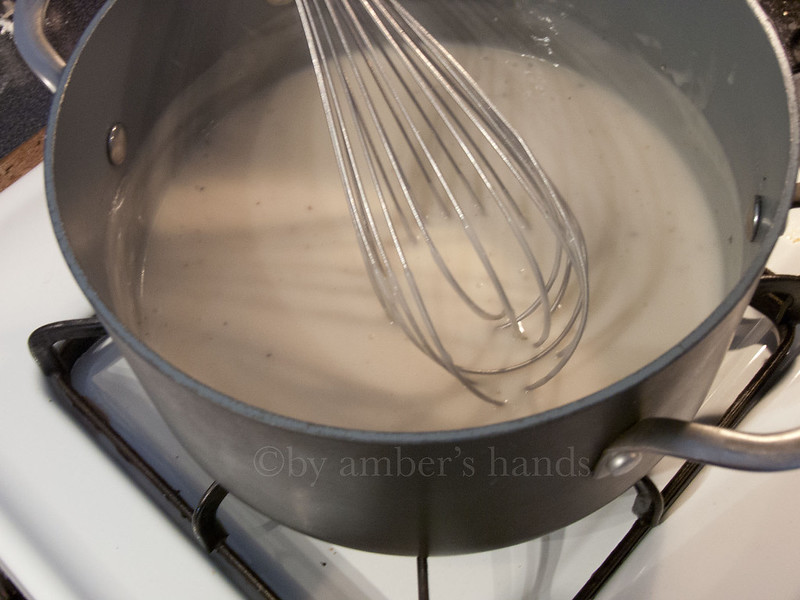 Cook this, whisking constantly, until quite thickened. I stopped mine when I could see the bottom of the pan where I’d just whisked. It will thicken a little more as it cools. You want it to cool a bit before mixing it with everything. You could easily make this ahead of time and store it in the fridge for a day or two. 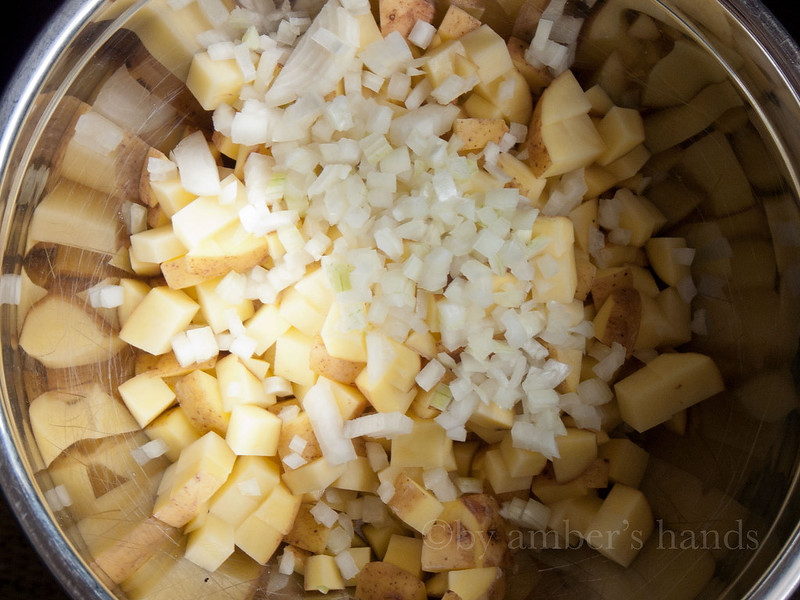 In a big ol’ bowl, mix together the potatoes, and a small diced onion. Or half a large onion. I didn’t measure what it comes out to, but somewhere in the 1/2 cup to 3/4 cup range will be fine. 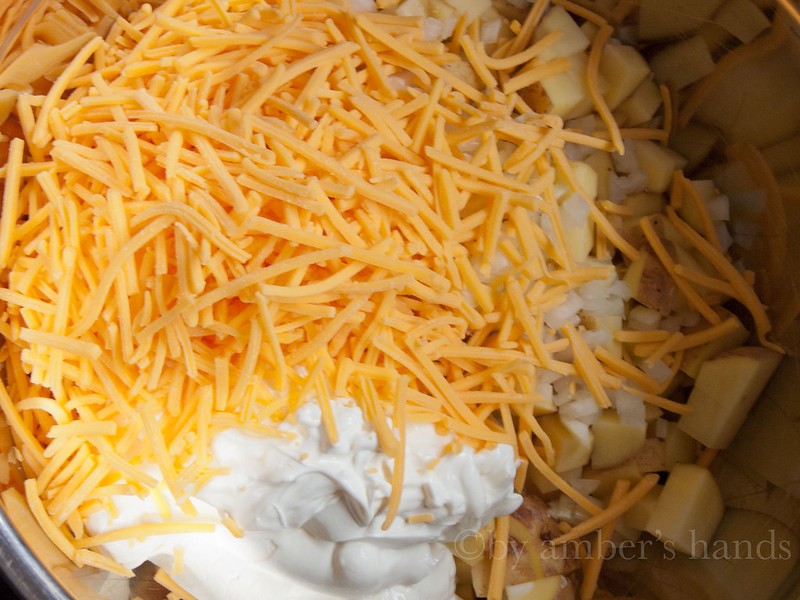 Add to this 8 oz. of shredded sharp cheddar and 16 oz. of sour cream. And for Pete’s sake, don’t use reduced fat sour cream. That stuff gives me the creeps.

Ok, as you can probably tell, I phoned it in and used pre-shredded cheese because I was lazy. Shredding it yourself will yield better results, but it still works well to use the bagged stuff. If you use higher quality cheese, you’ll taste the difference, and it will be awesome. And you don’t have to stick with cheddar, but you’ll probably be happier with something on the sharper side so you have a good balance of flavors. 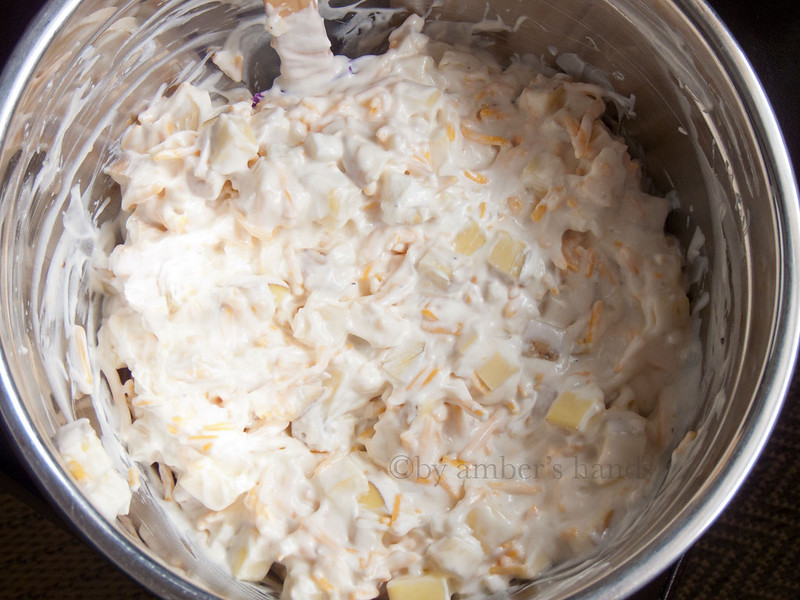 Stir it all together along with the cooled sauce. Note that if you make the original version, it will look a bit thicker than this (or if you left your sauce to cool completely… I was too impatient.) No worries. 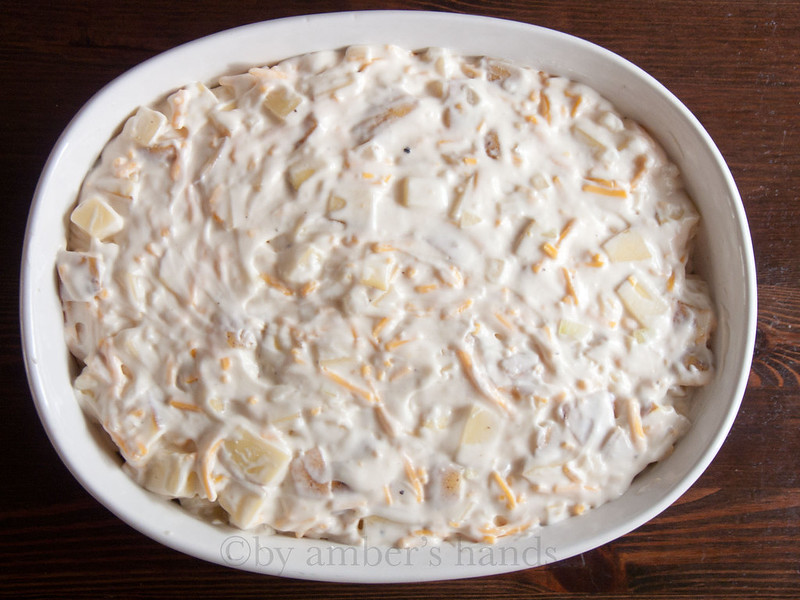 I made this in a casserole dish this time, but I think it works a little better in a 9 x 13 pan. You’re going to bake this just the same as the original version, at 350 for 1 hour 15 mins.

Notice I skipped the corn flake topping on this one. I actually like the corn flakes, but I didn’t have any on hand because we never eat corn flakes. And have you noticed corn flakes only come in the hugest cereal boxes you’ve ever seen?? Seriously. On several occasions I’ve bought corn flakes for this recipe and had the box sit in my cabinet for years until I finally tossed it. Sad.

I actually thought about substituting panko breadcrumbs, but I was out of those, too. I tried putting some cheese on the top halfway through the baking process, but the filling bubbled up around the edges so much it looked sort of silly. I think that might work better in a 9 x 13 as well. In any case, you can easily bake this with no topping and it turns out great. 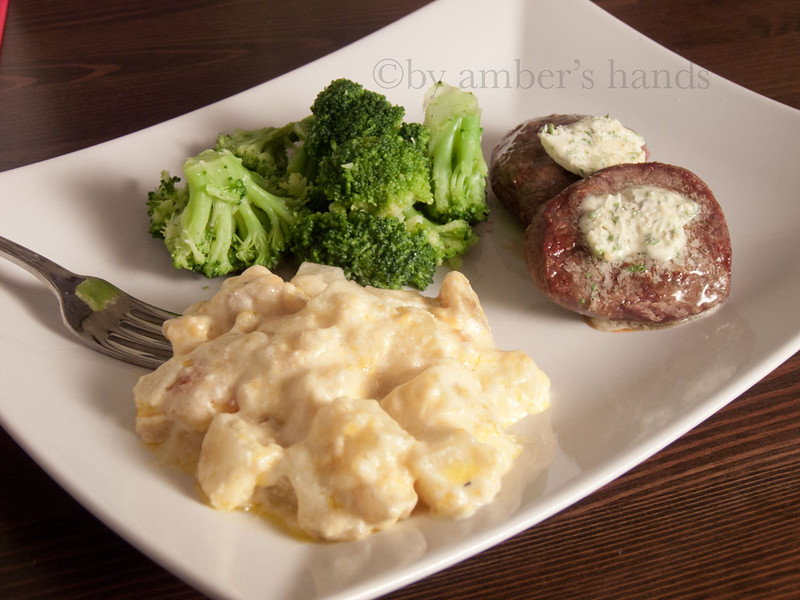 Whichever version you use, it’s going to be a crowd pleaser. I mean, seriously?! How can you go wrong with potatoes and sour cream and cheese?!

Make this and bring it to whatever Super Bowl party you go to. Your fellow guests will love you forever.