Cooking, Filipino Food, Sweets
Pin2K
Share73
Tweet
The links in this post may be affiliate links. This means I may receive a small commission if you buy through these links, at no additional cost to you, which helps me run this blog. Read my disclosure here.

Last weekend was my birthday, so I made myself a cake. If you are a regular reader of this blog, you might know that every year, I make this Marble Cheesecake. It’s delicious, but since it’s Filipino Food Month over here, I decided to make something different: Sans Rival.

I remembered this cake that my mom used to get now and again when I was little. I hadn’t had it in ages– my younger sister doesn’t remember ever having it at all– but I looked up some recipes and decided to give it a go.

Sans Rival is a Filipino dessert that is decidedly French in origin. Layers of daquoise (a meringue made with nuts) are sandwiched together with French buttercream. While French daquoise is traditionally made with almonds, this is made with cashews. Once all the layers are assembled, buttercream is used to frost the entire thing, and then it is adorned with more cashews.  Since I had never made this before, I consulted a lot of recipes but followed this one by To Food With Love most closely.

This recipe is a bit putzy, but isn’t terribly difficult. You can make the meringue layers a day ahead to break up the time it takes. I think the buttercream would sit fine in the fridge for a day as well, and then you’d only have to assemble it the day of. The final product also freezes very well. To start, make the meringue. In the bowl of a high-powered mixer, beat 6 egg whites until foamy (save the yolks for later), then sprinkle 1/2 tsp. cream of tartar over it and beat until stiff, but not dry.

Tips for beating egg whites: make sure the bowl and beaters are completely free from oil. Make sure eggs are separated cleanly, as in no yolks broken in the process. If any fat (from the yolks or residue on the bowl/beaters) gets into the whites, they won’t whip. Egg whites will also whip better at room temperature, but if you have a high-powered mixer, you probably won’t have trouble with cold ones. Slowly beat in 3/4 cup of sugar and beat until stiff and glossy, and add 1 tsp. vanilla. Add 1 1/2 cups chopped cashews. Chop them relatively fine, or if you want you could even grind them. I used a nut chopper set to “fine” for mine. Fold the nuts in gently until just incorporated. A rubber spatula works well here, and is safe to use once the whites have been beaten stiff. However, avoid using one before that, since it’s nearly impossible to clean all traces of grease out of them– something to do with the molecular structure of the plastic & oil being easily bonded or something. Line a cookie sheet with parchment paper. I used a 6″ cake pan to trace circles on the parchment with a pencil. You can use whatever you have, but shoot for around 6″ or plan to make fewer layers if you want to make it bigger. Flip the parchment over before putting the meringue on it so you don’t end up with pencil in your cake. You should still be able to see the outline. I used 2 cookie sheets with 3 circles on each.

I had read in some places that people had difficulty peeling the parchment off after baking (which seemed strange to me) so just for good measure, I added the smallest amount of grease possible to the parchment. I used a pastry bag fitted with the biggest round tip known to man, and then used an offset spatula to make the tops a bit more even. If you don’t have a pastry bag & tip, you can use a ziplock bag. Just cut off one of the bottom corners to pipe through. Bake for 1.5 hours, rotating the pans halfway through, then turn the oven off and allow the meringues to cool in the oven without opening it. I left mine overnight and they were perfectly dry. They also lifted right off the parchment with no coaxing needed. To make the buttercream, start by beating 6 egg yolks. If you make the meringue the night before, you can keep your yolks in a jar in the fridge until you need them, but let them come to room temperature before using them. Beat them until they’re pale and thick (several minutes.) In a saucepan, place 1 cup sugar and 1/3 cup water. Clip a candy thermometer to the side, and heat, swirling the pan occasionally, until the mixture reaches 235˚- 240˚ F. I accidentally let mine get a few degrees above that, and while it ended up alright, it wasn’t ideal. Immediately when the temperature reaches that stage, start the mixer and pour the hot sugar in a steady stream into the egg yolks, beating until it’s completely incorporated. The mixture will thicken. Mine ended up a little stringy, I think because the sugar got cooked longer than it should have. I was expecting it to become a bit fluffier, and was afraid I might have to start over, but once I added the butter it was alright. You’ll need 2 sticks of butter at room temperature, cut into 1″ cubes. THIS IS IMPORTANT: Do not add any butter until the egg/sugar mixture has cooled to room temperature! As you beat the sugar into the yolks, it will first get very hot, and then start to cool as you beat it more. If, after you’ve beaten it well and it’s nice and thick, the mixture is still warm, place it in the refrigerator to cool before adding the butter.

Add the butter a few cubes at a time, beating well until they’re all incorporated. It should look like a light and fluffy, pale yellow frosting. At this point, you can optionally add about 1 1/2 Tbsp. dark rum. I’d definitely recommend it.

Stash it in the fridge to cool a bit. You can leave it in the fridge for a day, covered, but if it’s gotten really firm you’ll need to beat it again before using it so you can spread it easily. Repeat, alternating meringue and buttercream until you use all the meringue disks. Place the final meringue layer upside down so the top is flat. Ice the top and the sides of the cake. As you can see, my cake icing skills are seriously lacking. Lucky for me (and you, if you struggle with this, too) the whole thing is getting covered in cashews so you won’t even be able to tell. Use 1 cup of chopped cashews to cover the top and sides. You’ll need to press them gently against the sides to get them to adhere well. Transfer to a serving place and chill for 2 hours or more, then slice. For best results, use a serrated knife and push down straight through the layers. It’s a pretty fragile cake, so be careful! I also suggest cutting the pieces fairly small– as you might have guessed, this is a very rich dessert!

Happy Birthday to me! 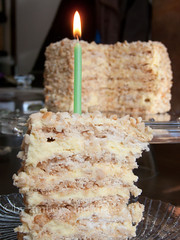 For the meringue layers

Preheat your oven to 225˚F. Line 2 cookie sheets with parchment paper. Trace 6 6-inch circles on the parchment in pencil, then flip parchment over and grease very lightly. In the bowl of a high-powered mixer, beat 6 egg whites until foamy (save the yolks for later), then sprinkle 1/2 tsp. cream of tartar over it and beat until stiff, but not dry. Slowly beat in 3/4 cup of sugar and beat until stiff and glossy, and add 1 tsp. vanilla. Fold the nuts in gently until just incorporated. Pipe meringues onto the circles evenly, spreading the top with an offset spatula. Bake for 1.5 hours, rotating sheets halfway through. Turn off oven and allow to cool completely in the oven.

Beat egg yolks until pale and thick. Meanwhile, place sugar and water in a saucepan over medium heat, swirling occasionally, until it reaches 235˚-240˚F. Immediately pour the sugar mixture in a thin, steady stream into the yolks, with the mixer on medium. Beat until thick. Allow mixture to cool (if it hasn’t already) and beat in butter, a few cubes at a time until fully incorporated and light and fluffy. Add rum. Chill for at least 30 minutes. If chilled longer, beat again until easily spreadable before assembling cake.