Cooking, Sweets
Pin15
Share
Tweet
The links in this post may be affiliate links. This means I may receive a small commission if you buy through these links, at no additional cost to you, which helps me run this blog. Read my disclosure here. I’m calling this “Samoa inspired ice cream” because I can’t tell you it tastes exactly like biting into a Samoa girl scout cookie. But all the elements are there and it tastes amazing.

I wasn’t necessarily going to do a post about this ice cream right away. I made the first batch about a month ago, and when my mom tasted it, she INSISTED that I blog about it right away because it’s just that good and because the first batch ran out.

I’m not going to lie to you. This recipe is not hard, but there are kind of a lot of steps. But these steps are easily broken up over a couple of days, or do what I did and take a Saturday at home and do a little bit throughout the day. Most of the work isn’t really hands-on, but you need a lot of time to cool the custard and bake some up some shortbread. But it’s so worth the time. This might be my new favorite ice cream of all time.

I started out by modifying Alton Brown’s vanilla ice cream recipe by substituting some of the half & half for coconut milk. Oh, and by adding some of this glorious stuff. If you’ve never had dulce de leche, go out and get some right now. Do it. It is everything I love about caramel, but without being tooth-numbingly sweet. The best part of this recipe is that you don’t use the whole can of this stuff, so feel free to eat a spoonful. Or 5. Note: If you’re planning to make Samoa Ice Cream Sandwiches (which you totally should) you’ll need the rest of this can for that. So unfortunately you can’t eat a spoonful or 5. Start out by pouring the contents of your can of coconut milk into a large measuring cup. It will be roughly 1 3/4 cups if I remember right. Add half & half to get to 3 cups, and then add 1 cup of heavy cream. I’m also not going to pretend that this is a diet ice cream. It’s not. Place the milk mixture into a medium saucepan and heat just until it bubbles a little on the edges, but don’t boil. While the milk is heating, beat 8 egg yolks (yes, 8!) until lightened and thickened. It will be much lighter and thicker once the sugar is added. Mine was still somewhat grainy, but it didn’t affect the final outcome. Return this to LOW heat, and watch it very carefully. You want to cook this mixture to 170˚ F, or until it coats the back of a spoon. This didn’t take long for me, and I stick a candy thermometer in there to help me watch it. If you overheat it, the custard will break and turn into scrambled eggs. There’s no salvaging it after that, so watch out. Once it’s adequately hot, strain it into a large bowl. Straining it helps make sure that you don’t have any stray eggs that didn’t temper well and ensures a smooth consistency. Add about 1/3 of a cup of the dulce de leche while it’s still warm and whisk until it’s incorporated. Mine still had tiny flecks of dulce de leche that didn’t fully mix in, but it doesn’t matter. Also add 1 1/2 Tbsp. of vanilla extract at this point.

Now you’ll need to cool the mixture. You have a few options for this. You can put it straight into the refrigerator (don’t cover it until it’s cool enough not to form condensation on the cover) for several hours or overnight, or put it over another bowl of ice water. I think the water bath makes it go quicker, but after a bit I still usually throw the whole water bath into the fridge after a while to speed up the whole thing. But it will still take a few hours. You need it to be 40˚ F or below. Sometime while the custard is cooling, make some shortbread. Here’s the thing: if you happen to have Samoa cookies on hand and want to use those instead, go for it. You could also buy some shortbread cookies, but shortbread is seriously the easiest thing to make ever. I’m not kidding. You need 1 part brown sugar to 2 parts butter to 4 parts flour. The end. For this recipe, I made a super small amount. 2 Tbsp. brown sugar, 4 Tbsp. softened butter, and 1/2 cup of flour (and a pinch of salt.) Cream the butter & sugar together, then stir in the flour & salt. Boom, your dough is done. Turn it out onto a small sheet of floured parchment and knead a little until you can roll it out. Separate them, brush off the excess flour, poke holes with a fork. If I were making this to actually serve as cookies, I would have been more careful in making them look nice, but they’re getting chopped up, so why bother? Once cool, eat one, just to make sure it’s good. Then chop the rest of them up. You’ll need a cup-ish. Or a cup and a half. Doesn’t really matter a whole lot. This is optional– the first batch I forgot I was going to do this, so I tried it the 2nd time. I like the extra texture it adds, but it doesn’t need it either. So if you want to, toast up about 1/2 a cup of dried coconut flakes. I did mine in my toaster oven but it kind of took a while. You can throw them in the oven at 300˚ for 5 or 10 minutes, too. Some time before churning, or even right when you start churning, you can make some dulce de leche for drizzling. The first time, I tried using it straight from the can, but it’s pretty thick, so it wasn’t ideal. It still worked ok, so if you want to skip this step, go for it. It just makes it a little easier. Put 1/4 cup dulce de leche in a small, microwave safe bowl and add 2 Tbsp cream. Microwave for 30 seconds or so. Whisk it together, then let cool.

You’ll also need some ganache. I don’t have pictures of that because I used ganache I had leftover from my last batch of macarons. Leftover gananche?? How does that even happen?? But here’s what you can do. You don’t need much. Chop 1 oz. bittersweet or semisweet chocolate and place in a bowl. Heat 3 Tbps. cream in the microwave or on the stove top until scalded but not boiling. Pour over the chocolate and let sit a couple of minutes, then whisk together. You can double this if you want more. Churn the ice cream according to the manufacturer’s instructions. Once it’s just about finished, add the chopped shortbread and toasted coconut, if using. Surprisingly, this actually all fit in my ice cream maker. Barely. Now, as you’re putting the ice cream into your storage container, layer ice cream with drizzled dulce de leche and ganache. I do about 3 layers of each.

This is the hardest part of the whole process:

You have to wait 3-4 hours for it to firm up in the freezer. It’s agonizing. But when it’s done… This ice cream is perfectly smooth and never gets overly hard like some homemade ice creams can. And each flavor is in perfect balance with the others. It’s not too sweet and is full of coconut, caramel, chocolate deliciousness.

If you like Samoas… you should seriously try this ice cream. All the steps are totally worth it once you get a spoonful into your mouth. You’ll forget all about the work it took to get you there. You might forget about everything else for a moment, too! Not recommended for consumption while operating heavy machinery. 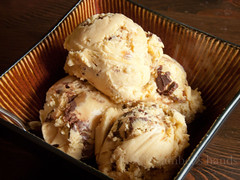 Combine coconut milk, half & half, and cream in a medium saucepan and heat just until bubbles appear on the edge of the pan. Do not boil. Beat egg yolks until light and thick, and gradually whisk in sugar. It should be much lighter and thicker at this point.

Return this to LOW heat, watching very carefully. Cook this mixture to 170˚ F, or until it coats the back of a spoon. Do not overheat as your custard will break and not be salvageable. Strain into a large bowl and whisk in dulce de leche and vanilla while still warm.

Cool the mixture by either putting straight into the refrigerator (don’t cover it until it’s cool enough not to form condensation on the cover) for several hours or overnight, or putting it over another bowl of ice water. Chill until it reaches 40˚F or cooler.

For Shortbread:
Preheat oven to 350˚

Cream the butter & sugar together, then stir in the flour & salt. Turn it out onto a small sheet of floured parchment and knead a little until you can roll it out. Roll about 1/4 to 1/2 inch thick, and cut it into 5 or 6 biscuits. Separate biscuits, brush off the excess flour, poke holes with a fork. Spread with a thin layer of dulce de leche. Bake for 20-25 minutes. Let cool, then chop into bite-sized pieces.

Mix-ins:
Dulce de leche: Put 1/4 cup dulce de leche in a small, microwave safe bowl and add 2 Tbsp cream. Microwave 30 seconds.
Ganache: Chop 1 oz. bittersweet or semisweet chocolate and place in a bowl. Heat 3 Tbps. cream in the microwave or on the stove top until scalded but not boiling. Pour over the chocolate and let sit a couple of minutes, then whisk together.

Churn the ice cream according to the manufacturer’s instructions. When nearly finished, add the chopped shortbread and toasted coconut, if using.

Layer ice cream into container in 3 parts, drizzling dulce de leche and ganache after each later. Freeze until firm, about 3-4 hours.