Crafts
Pin84
Share11
Tweet
The links in this post may be affiliate links. This means I may receive a small commission if you buy through these links, at no additional cost to you, which helps me run this blog. Read my disclosure here.

Well, baby #2 will be here sometime in the next several weeks. I feel like I still have loads of things to get ready before this little one arrives.

We’re planning for the new one to bunk with Little Man, at least for a while, so we’re working on making his room fit for two. While this involves mostly adding furniture and reorganizing things, I also noticed we don’t have much up on the walls. When Little Man was born, we got some adorable forest animal decals. As soon as he was ambulatory, he made it his mission in life to climb whatever was necessary to take them all down. Now he has one solitary dragonfly that’s still in place.

I didn’t really have any plans for putting anything on the wall until I got a sweet little machine for my birthday this month. It’s a Silhouette Portrait

. (The Portrait is the smaller version, capable of cutting materials up to 8″ wide. They also sell the Cameo, which can cut materials as wide as 12″.) So far I’ve been having tons of fun with it. It comes with software you can install, and then you hook up the machine to your computer. You can buy designs in their store (most of which are $.99 each) or create your own. It’s really quite versatile. I love it.

Anyway, fooling around with my machine gave me a great idea for creating an alphabet art piece for Little Man’s room. The best part? He made it mostly himself.

software. With the software you can use whatever fonts you have on your computer, so I used a variety of fonts in several sizes and arranged them in a way I liked. The canvas I used is 10″ x 20″

, but the Silhouette doesn’t come with instructions for that. But thankfully someone else out there fiddled around with it, and I found instructions at Shanty2Chic. What I did was set the thickness to 3 and the speed to 8, and set it to cut without a mat, per the instructions. I cut the contact paper a bit wider than 8.5″ inches to make sure there was enough for the rollers to hold onto. It took me a few tries to get it to load properly because it wants to curl so much, but after a little fiddling, it was just fine. The contact paper cut beautifully and didn’t give me any trouble at all. I should mention I got just your standard Con-Tact brand paper

from the craft store.

If you don’t have a Silhouette FOR THE LOVE OF PETE, DON’T DO THIS. Unless you want there to be much weeping and gnashing of teeth. I tried sticking the letters into their proper place and then getting rid of the other contact paper, and it just didn’t work well at all. I had to fish the letter U out of the trash after it got stuck to a part I threw out. So for your own sanity, just place the letters about where they ought to be. It honestly doesn’t have to be 100% perfect with something like this, since the letters aren’t on a straight line anyhow. Here’s what it should look like. However, you can see that the contact paper doesn’t stick perfectly to the canvas, since it’s not a smooth surface. I was momentarily stymied, but then I remembered hearing that you can use Artist Gel Medium Well, I happened to have some of this sitting around from another project. Perfect! I don’t think you’d have to use the heavy gel for this– the medium and/or matte versions would probably be fine, but this is the only one I’ve tried, so I can’t say for certain. Just take a little paintbrush and paint the edges of the contact paper letters down. It worked quite well, although there were a few stubborn letters I had to paint twice.

Note: I was thinking that if I were to make another art piece similar to this one, I might try painting over the whole surface with the gel medium first, then stick the letters down & paint over the edges. It seems like this might help a bit when it comes to getting the letters to stick well, but I haven’t tried it yet. UPDATE: We did try this again, and painted the gel medium first. It ended up about the same. All that remains to be done is to paint! I let Little Man loose with his kid’s art paints

. Any acrylic or tempera paints should work just fine with this project. If you want to take a little more control of the outcome of the project, limit the colors you give your child so it matches whatever room you’re making it for. In our case, I wanted something fun and bright, so I let him use whatever colors he wanted. I think the whole canvas was a little overwhelming for Little Man. I tried to just let him go to town on his own while I did some other things, but he couldn’t really focus enough to finish on his own. It actually got easier the more paint was on it, and I just encouraged him to find white spots that wanted some color. Then we pretended the white spots were asking for specific colors to be painted. I had him paint the sides of the canvas, but if you wanted to leave them white, you could easily just use some painter’s tape to keep them clean. 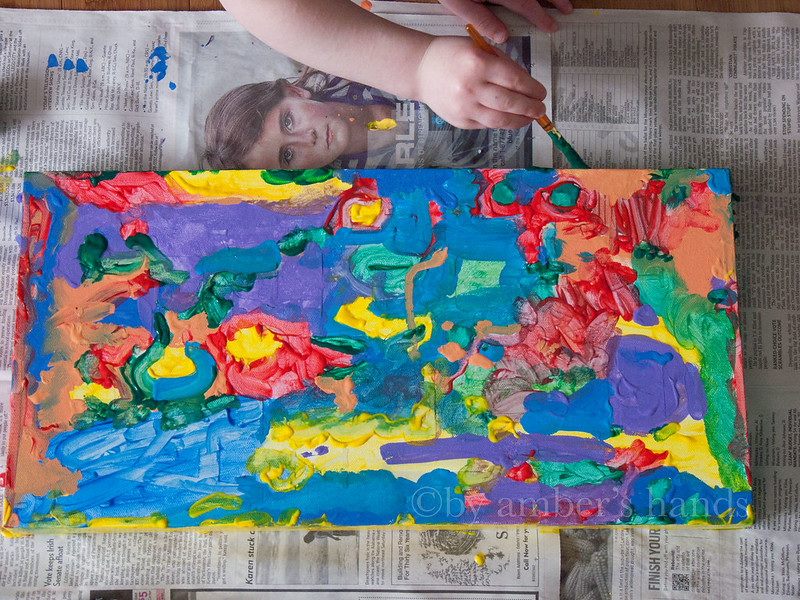 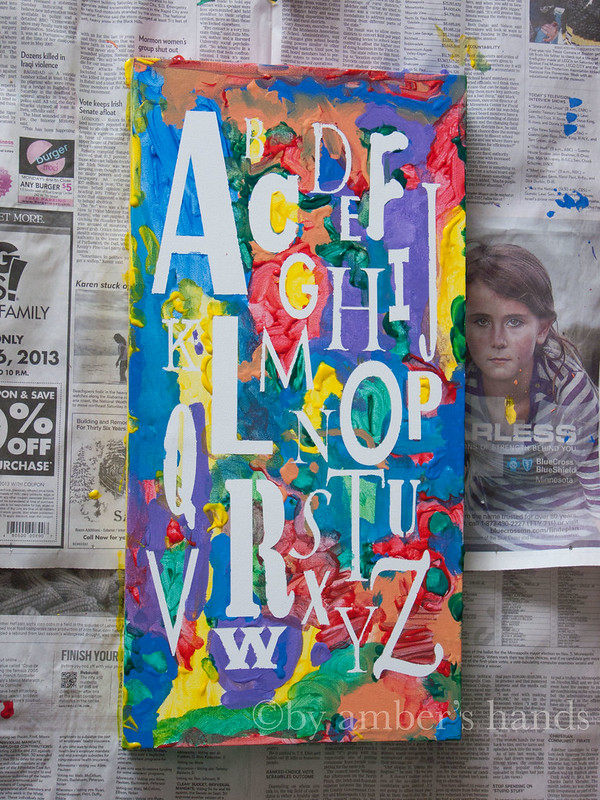 Once the canvas is completely covered in paint, while it’s still wet, use a craft knife

to loosen the edges of each letter and peel off. You can see it’s not 100% perfect, but I think it adds charm. The letters would have come out a little cleaner if the canvas had been painted faster, but there’s only so fast a 3-year-old can paint. 🙂 Places where the paint dried before we peeled the letters off are a little jagged.

Allow to dry completely before hanging. 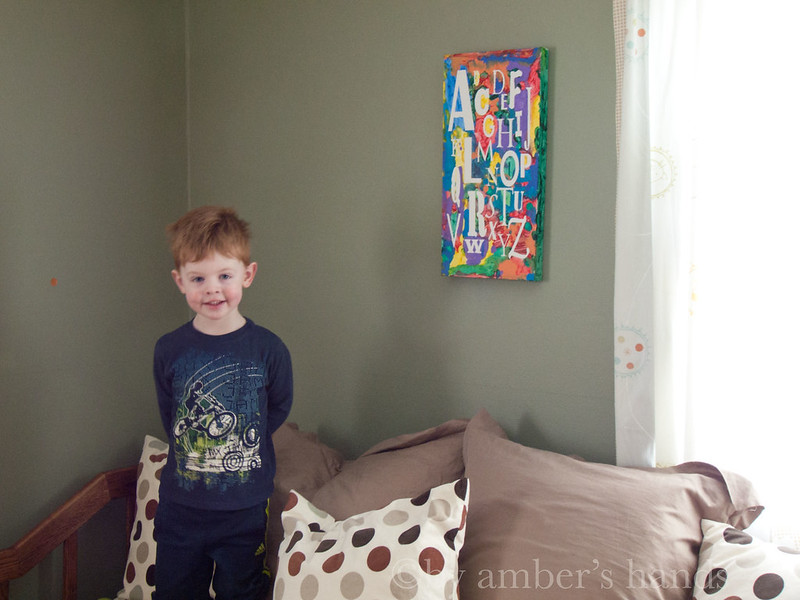 Little Man wanted to show you where it hangs in his room. He’s very proud of it! 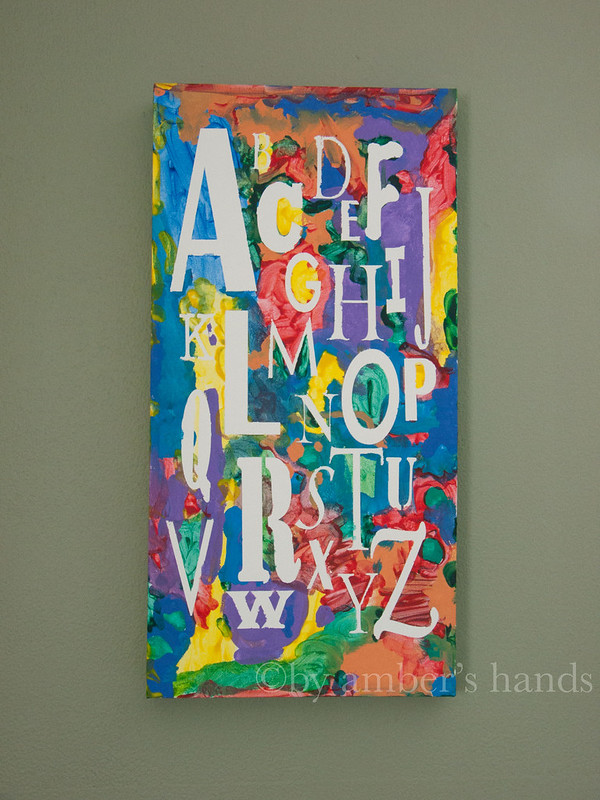 And there it is! All done.

With this technique, you could make several pieces. The Silhouette

is such a versatile machine! You can make an alphabet as I’ve shown you, or try numbers or a short phrase that has meaning to you, or your child’s name. (Check out this other piece I made a similar way!) I love this project because you get to decorate your kid’s room with something cool, and your kid gets to decorate his/her room with something they made themselves and can be proud of. A win-win!

For another children’s painting project, check out my Wrapping Paper Masterpiece post!

0 comments on Children’s Art Piece– For Kids, by Kids