Birthday Parties, My Life
Pin2
Share245
Tweet
The links in this post may be affiliate links. This means I may receive a small commission if you buy through these links, at no additional cost to you, which helps me run this blog. Read my disclosure here. 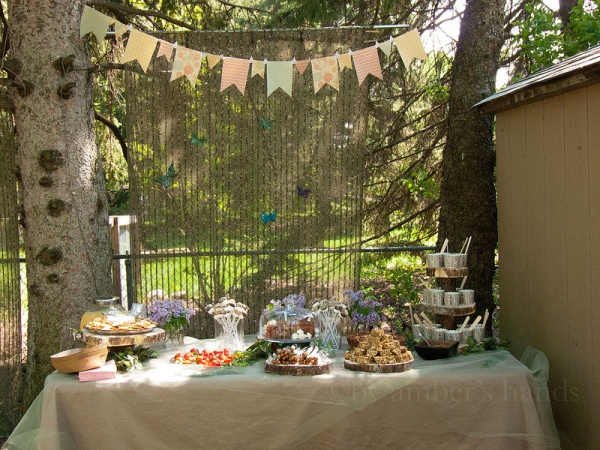 Last month was Miss Bean’s second birthday. I can’t believe that two years has passed since that sweet girl entered our lives. It’s hard to remember what life was like before she was in it!

Since she’s still a bit too young to tell us what kind of party she wanted, I had to figure out a party theme that I thought she would enjoy. One of her favorite things in the world is animals, so I decided on a Woodland theme, complete with cute little woodland animals.

We decided to use a little area in the back of our yard between some pine trees as our woodland area. My parents had this arch they let us borrow, and we threaded some small branches through it to create an entrance into the party.

So, funny story. A few years ago, one of our pine trees lining the back of our property fell in a storm. Well, it didn’t completely fall, it tipped and was leaning on our power lines. I called the power company, and they sent out some of their guys to take care of it. They started at the top of the tree, and after they’d taken off about half of it, the remaining trunk sprang back into place in the ground where it had previously stood. They said, “Well, it’s not on the power line anymore, so we’re done here!” And there the dead tree trunk stood. For years.

So when I was thinking about things we could do for this party, I thought it would be great to use some of that wood and finally take the whole tree down. I’m sure Hubs was really excited about my plans, but he went along with them like the awesome guy he is. It was also way cheaper to use free wood for decor. I initially had wanted some birch rounds/logs to use for decor, but those things are ridiculously expensive at the craft store.

One of the things we did with the old tree trunk was to cut it up into little “seats” that we set around some quilts we put on the ground for people to sit and eat on. Like a little picnic in the woods.

One of the biggest parts of the party was these masks we made for all the kids. We found a couple of templates online and then I designed several more based on a similar shape. I’m kicking myself for not taking photos of all the different masks, and each kid was able to take one home as a party favor, so I can’t take any more now! But that’s ok, I just hope they’re getting some use as dress-up items.

The kids, being toddlers, mostly were putting the masks on and taking them off astonishingly fast, but I got a few photos! Plus it was fun for them to try on different animals throughout the day.

We found some pretty sheer olive fabric that we put behind the table and then also between the two trees to the left of the table area, to help create some extra ambiance. I found some little fabric butterflies that we also pinned to the background fabric.

The pennant banner is from a paper pack I found at the craft store. It included a bunch of printed canvas pennants that I cut out and threaded onto some jute string. 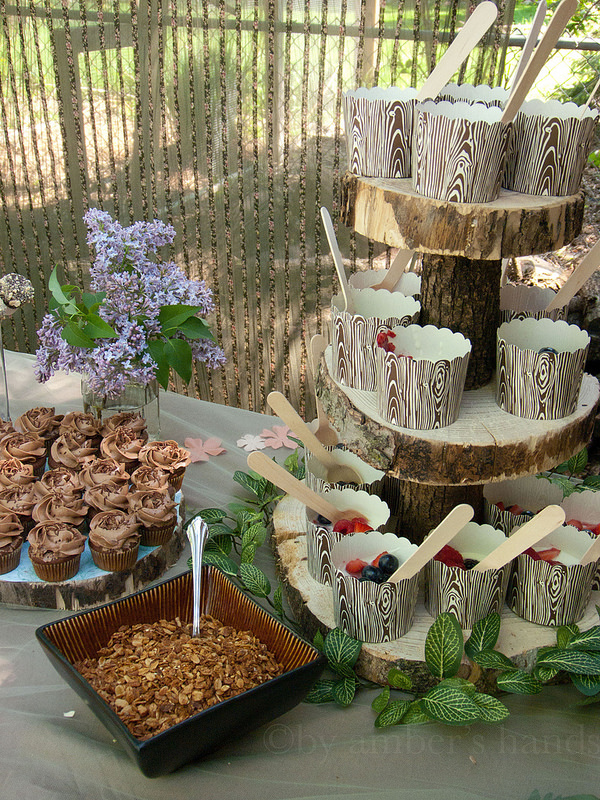 We had some fruit and yogurt that I put in these cute wood-printed cups, which we set on a little stand that Hubs made out of the old tree. Homemade granola on the side for sprinkling on top.

We used other cut rounds of the tree to stack food on. We cut some paper to fit on top so we weren’t placing food directly on the wood, since we hadn’t sealed the wood in any way.

I bought some little paper flower accents to put under the tulle that went over the tablecloth, and we used some silk vines around some of the items as well.

And I realized, just now, over a month later, that we had bought some cute little mossy woodland items that we were going to use to decorate and NEVER USED THEM. They’re still in a bag in my craft room. We, of course, bought these a couple of months before the party and so they’re long past returnable. For real, guys, I’d forget my head if it wasn’t screwed on.

Who wants to talk about food? Me! I do!

We made some cute caprese “mushrooms,” made with fresh ciliegine mozzarella balls, cut flat on the bottom, topped with halved small tomatoes. Then we placed them on a bed of chopped fresh basil.

We also made some “birch logs”with pretzel rods dipped in white chocolate and then striped with dark chocolate. These can be made several days ahead, which I did. No one wants to be working too hard on the day of the party! 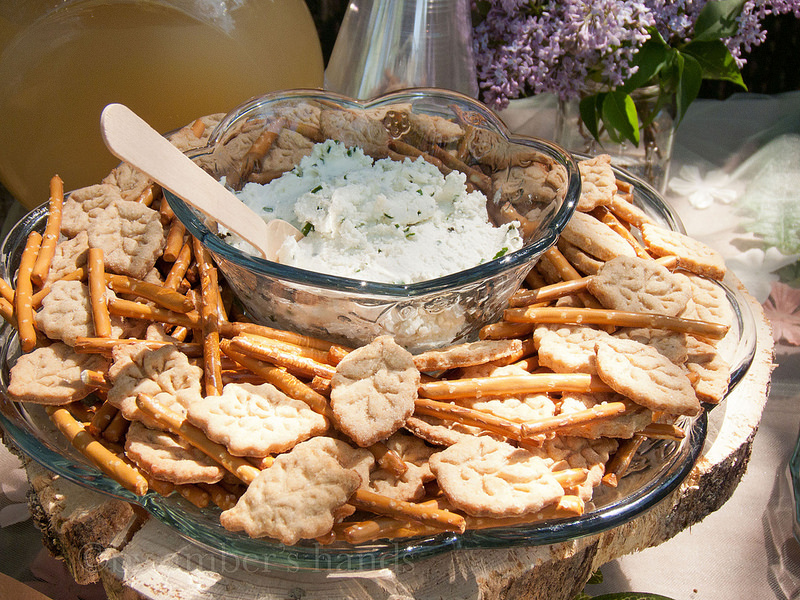 I made these leaf crackers using some leaf-shaped pie crust cutters. They were the perfect size for crackers! I layered these with some pretzel sticks to look like leaves and twigs. The cheese spread was goat cheese that I mixed with chives, thyme, and oregano from my garden. Very easy and delicious! 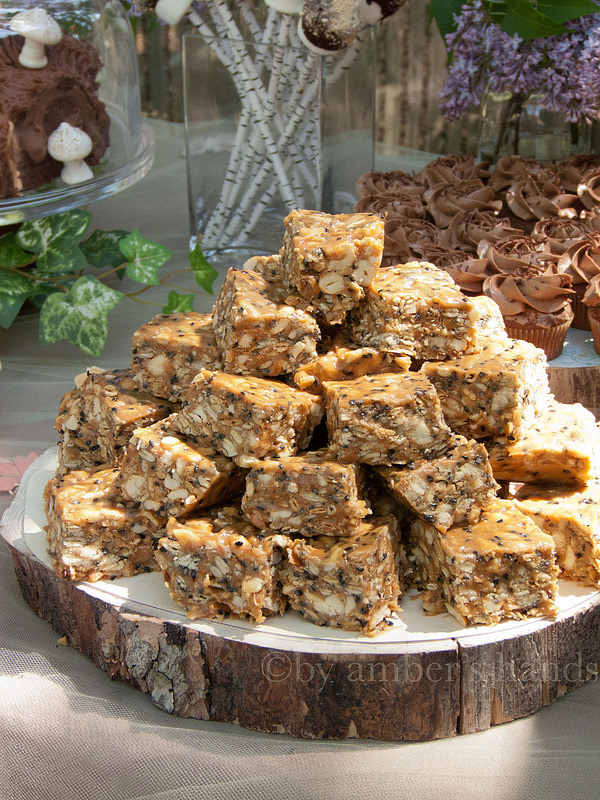 I also made birdseed bars again, just like I made for Little Man’s second birthday. Funny how they work so well for both themes! These can also be made a few days in advance. 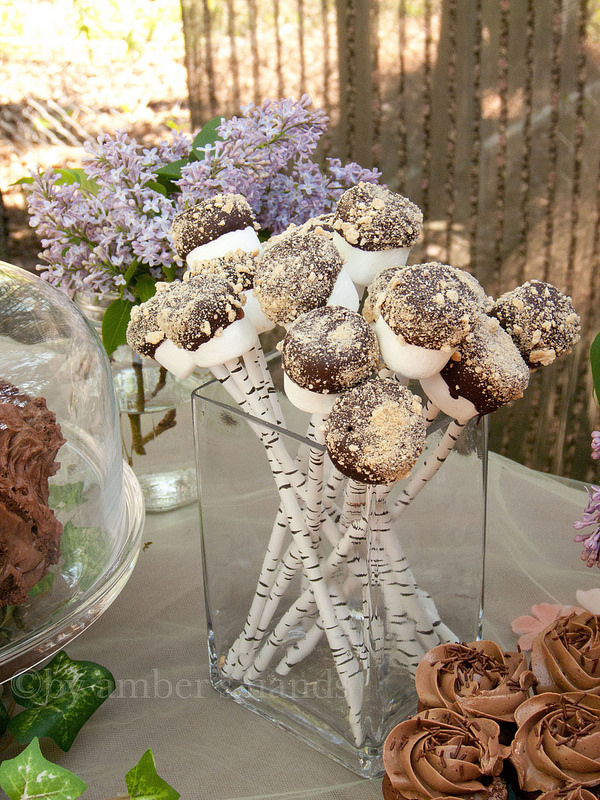 These s’mores pops are the easiest thing ever. Push marshmallows on straws (like these birch ones I used) then dip in melted chocolate and sprinkle with crushed graham crackers. Let harden, and store for up to a day or two in an airtight container.

The birthday cake was in the shape of a log with little mushrooms made from meringue. I remembered my mom would sometimes make a bûche de noël at Christmas time growing up, and it seemed perfect for this theme. Unfortunately, my mom didn’t have the recipe she used to use, so I had to search online and pick one I thought would work. Note to self: when trying a new recipe, maybe try it out before the actual time you need it. The cake wasn’t too bad, although it cracked a bit when rolling it. But the blasted pastry cream recipe I decided to use was not written well and I had to make it 3 times (making adjustments each time) before I could get it to work. The day (turning into the evening) before the party. I was not a happy camper. I also managed to have to make the buttercream twice because I cooked the sugar syrup too much and it turned into a big hard sugar lump in the egg yolks. Between redoing these two recipes, I ended up with a full dozen egg whites in my fridge. Oh, and the cake wasn’t big enough so I had to make cupcakes as well. Ha!

But see, the kids all had fun and ate the food, so it’s all good. And the chocolate cake with Nutella pastry cream and chocolate buttercream was totally delicious in the end.

When you’re planning a party for a 2 year old, it’s hard to figure out activities that they might be able to do, and would also be interested in doing. So I thought it might be fun to have a little foraging/scavenger hunt-type thing. My mom and sister made some cute little felted mushrooms (which I failed to take photos of) and we hid them around the yard. There were already tons of pine cones under the trees and we made sure there were little rocks around as well. I found these cute mini baskets at the craft store, and each kid got to take home a basket and whatever they put in it.

And I can’t write a post about Miss Bean’s woodland birthday party without talking about this adorable dress my mom made for her. It was so fun. We got the fabric from Crafty Planet, if anyone is interested. It was the first time I’d been to that store and I totally fell in love!

Look, here’s a picture of the cake where you can actually see it! It was a lovely sunny day, so the buttercream got very shiny by the time we got to it! You can see the little meringue mushrooms we made as well in this photo. It was so windy that day it took about twenty tries to get the candles lit! Miss Bean didn’t seem to mind, though. And she blew out her own candles this year.

Happy Birthday, my sweet girl! I hope you enjoyed your woodland party!